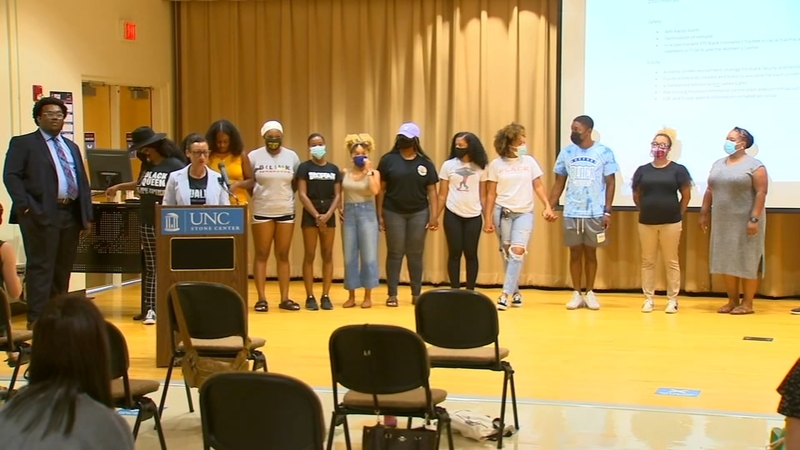 CHAPEL HILL, N.C. (WTVD) -- Just one day after acclaimed journalist Nikole Hannah-Jones decided against accepting a tenured position at UNC-Chapel Hill, instead. taking a job at Howard University, Black organizations on campus came together to present their list of demands to university officials.

During a Wednesday afternoon press conference, members and leaders from the Black Graduate & Professional Association, the Carolina Black Caucus, and the Black Student Movement met inside a room at the Sonja Haynes Stone Center on campus to express their continued support for Hannah-Jones and used the time to share what they called their "2021 Priorities".

"It was never just about tenure," said UNC alum and staff member Jaci Field. "The university has a unique opportunity to get it right. Tar Heels, this is our moment to create fair and lasting change," she said. "Don't let them steal your joy. We are the Carolina family."

HAPPENING NOW: A collective of Black student organizations at UNC Chapel Hill are speaking on @nhannahjones decision to take a position at Howard University instead of UNC. They’re also discussing a list of demands they want from the university. #ABC11 pic.twitter.com/s3m5tA1NCn

The Black student collective began their conference praising Hannah-Jones to accept a position at a university where she is "celebrated" and not "just tolerated".

"This moment is about the systemic issue of racism here at UNC," Field said.

The groups categorized their demands under two areas of opportunity: safety and equity.

Under safety, the groups called for anti-racist alerts sent to students in an effort to protect Black students, the termination of acting UNC police chief Rasheem Holland, the hiring of more permanent, full-time Black counselors trained in racial trauma, and an increase in Black staff in Title IX and the Women's Center.

During the Board of Trustees special meeting to discuss the tenure of Hannah-Jones, students were forcibly removed from the closed-door session. During the altercation, Black Student Movement vice president Julia Clark claims she was punched in the face by Holland. Clark showed pictures of her bruises on Twitter in the days following the incident.

Protesters were shoved out of the room at UNC’s BOT meeting ahead of a closed session to discuss Nikole Hannah-Jones’ tenure. Video from @laurenemeier pic.twitter.com/K0HRxAWzlH

"I hope for a day where Black people and Black students are not applauded for how they can take a hit or how many hits they can endure," Clark said of the altercation. "But instead, we are awarded safety on a campus we built. It is hypocritical for this university to claim that Black lives matter while disregarding the pain they have caused their own Black students and faculty."

BSM's president, Taliajah 'Teddy' Vann, echoed her colleague's statement. "The decision to allow Officer Holland further proves that this university or remorse for the violence it inflicts on Black students and the community members."

"Rasheem Holland's appointment to this position is a threat to the safety of and is an affront to the Black community whom he brutalized," said Vann.
The group wants to see Holland removed from his position, followed by a "complete, independent investigation into his misconduct."

In the area of equity, the collective demands a metric-driven recruitment strategy for Black faculty and reinstatement of the VITAE program, equity scorecards created and publicly available for each university department, a permanent memorial for James Cates, the restoration and contextualization of the Unsung Founders Memorial, and EOC and grade appeal information including on course syllabi.

Included in the equity scorecards will be racial diversity data and exit interview comments for Black staff and faculty who choose to leave the university,

"Understand in the next few weeks and months, we are holding the university's feet to the fire," Vann said.

"The university has a unique opportunity to get it right," Field added. "Tar Heels, this is our moment to create fair and lasting change...when you feel you don't have enough, know that we have plenty for you."

UNC-Chapel Hill Chancellor Kevin Guskiewicz responded to the demands and concerns of the Black student collective saying that there will be an "external review" of the officers' body camera footage following the events of the Board of Trustees meeting.

Read Guskiewicz statement in its entirety here:
"I am grateful for the continued advocacy of the Black Student Movement, the Carolina Black Caucus and the Black Graduate and Professional StudentAssociation. Their voices have been vital throughout the history of Carolina.

I have reviewed the requested actions they presented, and I am tasking my leadership team to create a Campus Climate Plan to address the concerns shared by our students, faculty and staff. I have asked Dr. Rumay Alexander, chair of the Faculty Council's Diversity and Community Committee, and AmyJohnson, vice chancellor for student affairs, to help lead this process until Leah Cox, Carolina's new vice provost for equity and inclusion and chief diversity officer, who starts July 19, is fully oriented to our campus.