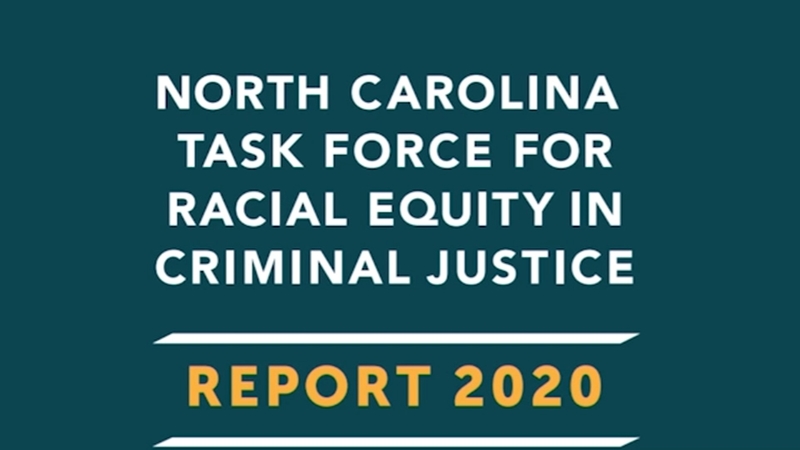 "North Carolina has a tragic legacy of slavery, segregation and racist violence that still affects our state and people to this day," said Attorney General Josh Stein, who co-chaired the Task Force.

The 23-member Task Force was formed by Governor Cooper in June following the officer-involved deaths of George Floyd and Breonna Taylor.

"We can't talk about racial equity in the criminal justice system without discussing use of force. It's what sparked this Task Force into existence. We recommend that law enforcement agencies ban the use of neck holds. That they develop policies to require officers to intervene when they see another officer use excessive force," said Stein.

On the criminal justice side, the task force honed in on multiple issues, ranging from financial obstacles to racial inequity.

"Another area that we looked at was how do we reduce the number of people who end up spending time in jail because they can't post a cash bond," said North Carolina Supreme Court Associate Justice Anita Earls, who co-chaired the Task Force.

They suggested eliminating cash bail for level 1, 2, and 3 misdemeanors in most cases, and requested judges take a defendants financial situation into account when assessing fines and fees.

"Once someone is in court and they are going to have a trial, we know the importance of having a racially representative jury. So there are a number of recommendations that seek to better achieve that goal, including expanding the jury list sources. We need much better data collection and more transparency on how jury lists are composed, and who ends up on our juries. And there are recommendations for changing the jury selection practice in the courtroom, as well as establishing a state commission on the jury system," said Earls.

The soon-to-be released report covers topics from marijuana to mental health, policing and use of force, court costs and fees, choke holds and police recruitment.

Part of their focus was on the state's youngest offenders, including asking for the minimum age for a child to enter the juvenile justice system to be increased from six to 12 years old; currently the age of juvenile jurisdiction in North Carolina is the youngest in the U.S.

Some of the changes will require Legislative approval; both chambers are Republican-controlled while both co-chairs of the Task Force are Democrats.

"This issue of criminal justice reform has actually been one of the few issues in these really deeply, divided times in our country and state where Democrats and Republicans have worked together constructively," said Stein.

"A criminal justice system that allows different outcomes for people of color needs change and these recommendations begin to help chart a more equitable course. I'm grateful for the hard work of task force members who represented all facets of the system and I'm eager to review the report and begin working on first steps."

There have been other groups who have been working on their own criminal justice reform recommendations, including the North Carolina Sheriffs' Association. They also released a statement Monday afternoon:

"Following the death of George Floyd and the civil unrest which gripped North Carolina and the nation, the North Carolina Sheriffs' Association recognized the need for law enforcement leaders to take proactive steps to ensure protection of the rights and safety of all citizens, while also making every effort to improve the profession for those who have chosen and will choose to become public servants as law enforcement officers in North Carolina.

While some of the recommendations vary, it is not surprising that most of the recommended changes related to the law enforcement profession are rather consistent throughout all of the various reports.

The sheriffs of North Carolina and the North Carolina Sheriffs' Association look forward to working with all interested parties and particularly with the 2021- 2022 North Carolina General Assembly on meaningful and reasonable legislative changes regarding the law enforcement profession which will be beneficial to the citizens of our state and to the dedicated men and women who serve our citizens as law enforcement officers.