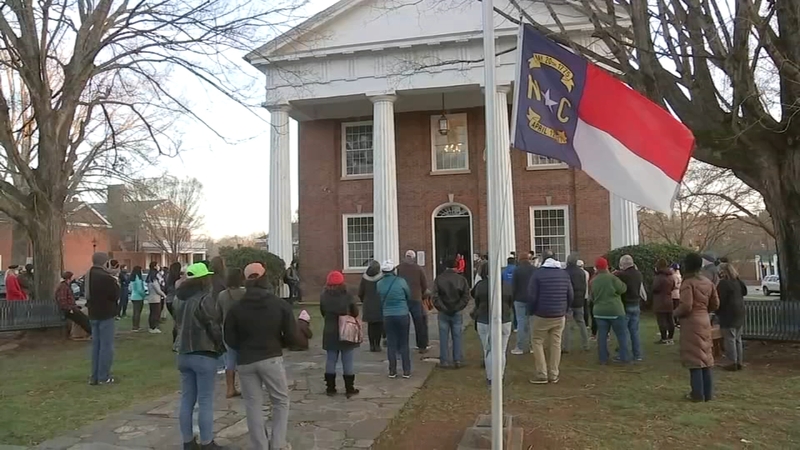 HILLSBOROUGH, N.C. (WTVD) -- As President Joe Biden was in Atlanta consoling family members of the victims of the spa shootings, many Asian Americans in the Triangle gathered outside the Old Orange County Courthouse with their Black, Brown and white allies -- standing in solidarity to say enough is enough.

On the steps of the courthouse, they took the mic, one after another, giving breath and voice to the pain of Asian hate.

"The AAPI (Asian American / Pacific Islander) community is frightened because they know this violence is not random," said Manuah Mandel of the Northern Orange NAACP.

Latarndra Strong, one of the founders of the Hate Free Schools Coalition, told the crowd, "I'm tired of people losing their lives because their skin isn't white."

Candlelight vigil in downtown Hillsborough, Friday night, to #StopAsianHateCrimes
• • •
“The AAPI community is frightened because they know this violence is not random.” #abc11 pic.twitter.com/hQhpixKWTC

Fifth-grade Orange County School teacher Kumar Sathy took the mic after the sun had set. He was still visibly shaken by what happened in Georgia. "When I saw what was happening on the news, I had to ask myself a question I shouldn't have to ask myself in this country: am I a target," he said.

The grief was all very fresh here in Hillsborough over the murder spree at multiple Georgia spas: eight people killed including six women of Asian descent. The accused killer claimed to police the attacks were fueled by a desire to end his sex addiction. But at the vigil, the tragedy was seen as one more sign of amplified racist and xenophobic violence against Asian Americans that is already on the rise.

"People trying to divorce the concept of hate crimes, 'this couldn't be a hate crime, it must have been sexually motivated.' But we know that there's this context of sexualization and fetishization of women in our communities."

"This is not something that is isolated. This is something that we're all living through in the fabric of our everyday lives," said Phian Tran, community engagement director for NC Asian Americans Together.

At the vigil, Tran shared personal stories of being made to feel less than including instances of racist misogyny on the street.

"Things like racialized catcalls I experience walking down the street; people commenting on my body in sexual ways, I never asked for," she told the crowd.

And when she first heard the news of what happened in Georgia, Tran says she felt numb, almost desensitized to the violence against her community. "I really feel grief for the people who were lost, for their family members who were left behind - and for the people who are living in fear."