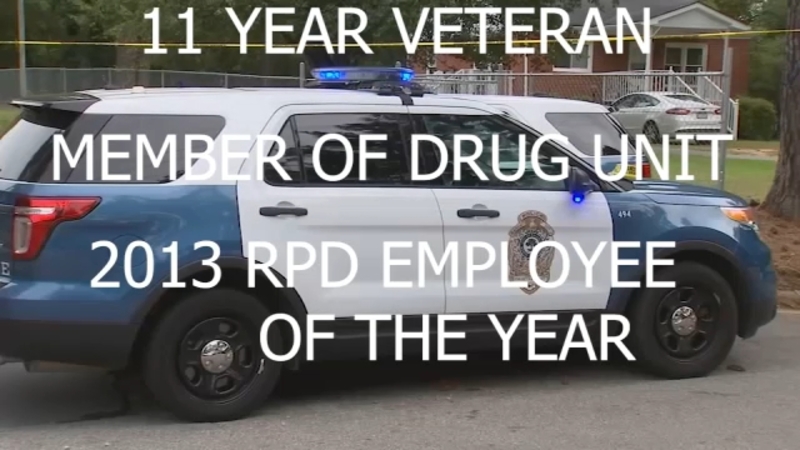 RALEIGH (WTVD) -- A veteran Raleigh police detective is off the job while the department and the Wake County District Attorney investigate more than a dozen fraudulent drug cases. Some people sat in jail for weeks and months based on evidence that turned out to be fake.

The police officer who headed the investigation was once celebrated by the department as one its best. Now, he's under investigation himself.

Wake County DA Lorrin Freeman said that "concerns were first raised near the end of February" but took several more months to determine the evidence was not real. According to court documents obtained by ABC11, between 12 and 15 defendants were all charged with trafficking heroin, starting in Dec. 2019 through May 2020. The suspects were arrested and held in the Wake County Detention Center on bonds of up to $250,000. But, most, maybe all of the defendants were framed.

"What we know so far is that we do have a confidential informant who was providing false information to law enforcement and law enforcement was relying upon that in making charging decisions," Freeman said.

EXCLUSIVE: A veteran Raleigh Police detective is off the job while RPD and the Wake district attorney investigate more than a dozen fraudulent drug cases. As many as 15 people were jailed for selling heroin until it was finally revealed they were framed.
Story at 11 #abc11 pic.twitter.com/PqWxuv4hXV

The Raleigh police detective in each case is Omar Abdullah. The Raleigh Police Department would not provide a photo, but says Abdullah is an 11-year veteran, a member of the department's drug unit and the 2013 Raleigh Police Employee of the Year.

Abdullah was paying a confidential informant who promised to tip-off officers to Raleigh heroin dealers. Instead, the informant returned with videos and audio recordings of drug buys with critical clips missing and a substance that lab tests revealed months later, wasn't drugs at all.

After some suspects spent months behind bars, the district attorney's office began dismissing most of the cases. An investigation is now underway into the informant and whether Detective Abdullah knew the evidence was phony.

"Certainly, if at some point, we determine that the officer was aware that the confidential informant was providing bad information then this review will take a different direction," Freeman said.

Kimberly Muktarian, a criminal justice reform advocate and long-time proponent of a police accountability task force in Raleigh, points to the bad cases as another example of a broken system.

"This is not just an incident, this is a culture," Muktarian said. "Many of these young police officers feel that they can get away with it. And if left long enough, they get promoted."

Raleigh criminal justice reform advocates are pointing to the case as another example of a broken system. #abc11
• • •
“This is not just an incident, this is a culture!” - Kimberly Muktarian, Save Our Sons

"None of us want to be part of a system where a confidential informant is lying to law enforcement and we're relying on that to prosecute people," Freeman responded.

Raleigh Police Department declined to comment on the case to ABC11, citing personnel privacy laws. Detective Abdullah is on administrative leave while the police Internal Affairs Division looks into the matter.