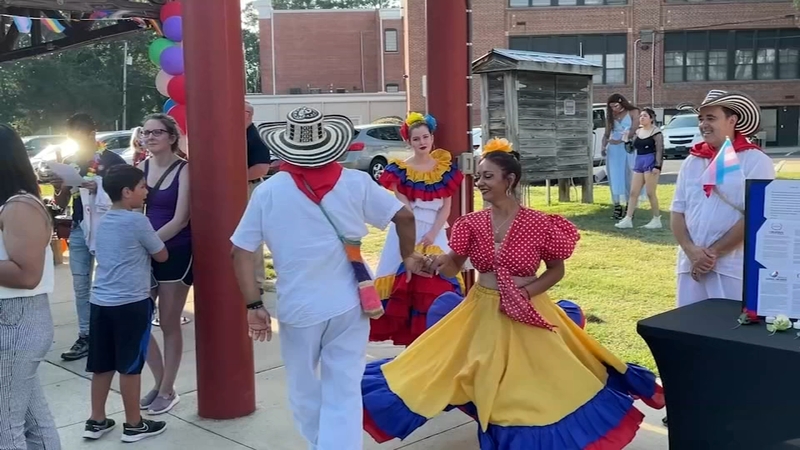 CARRBORO, N.C. (WTVD) -- For Elsa Huerta, learning to speak English was key to having a voice. One that she offered on Saturday to Hispanics in the LGBTQ+ community as they celebrated "Orgullo Latinx Pride" at the Carrboro Town Commons.

"It's important to LGBTQ 'Latinx' community because this event, we prove we are here," Huerta said.

It was an exciting return to in-person for Huerta and other organizers after the last event in 2019.

"We want our communities not only to feel protected by us but to feel we're advocating for them, to see change," Emilia Ismael said.

From 5 p.m. to 9 p.m., the schedule was packed with music and performances while food trucks, various organizations and a mobile clinic were set up outside.

A display remembering the 49 victims in the Pulse Nightclub shooting in Orlando caught the attention of people walking by. June 12 will mark six years since it happened.

In North Carolina, Huerta thought of the state of the LGBTQ+ community, including the controversial Parents' Bill of Rights.

"The school is the second home (for students) because they are half the time there," Huerta said. "And now, especially, young people, (are) now scared."

But in a town where organizers see it as a "safe space," people such as Kevin Gomez-Gonzalez, 21, said what "Orgullo," means to them.

"It's a political action, it is a demonstration, it is a show of prominence and empowerment and visibility," Gomez-Gonzalez said. "Asserting oneself even when the world may not be so ready to embrace you."

The UNC student shared how this was a first for them as they experience what it's like to celebrate with the Latino LGBTQ+ community and feel supported.

"Something like this could never happen in a million years, not only because of the culture, around where we grew up, but also just the very infrastructure of having a town space where people can come," Gomez-Gonzalez said. "That community building was something I sorely lacked as a child. How wonderful would it have been to have this growing up."
Report a correction or typo
Related topics:
community & eventscarrborochapel hilllgbtq+lgbtq+ pridegaylatinopride monthhispanic
Copyright © 2022 WTVD-TV. All Rights Reserved.
TOP STORIES
Wake County continues to scale down COVID-19 testing sites
Is your home prepared for hurricane season?
Fireworks dazzle over Dix Park, downtown Raleigh for Fourth of July
Enthusiastic crowd greets return of Fort Bragg's July 4th celebrations
Renters struggle to find apartments in hot housing market
Brittney Griner writes letter to Pres. Biden pleading for his help
2 police officers shot during July 4th festivities in Philadelphia
Show More
Highland Park parade shooting victims range in age from 8 to 85
Person of interest taken into custody after 6 killed in IL shooting
Don't celebrate July 4 by shooting guns, police warn
Dix Park becoming premiere spot for big events
In Raleigh, people observed this July 4th in different ways
More TOP STORIES News