NEW YORK -- The Carolina Panthers have selected defensive tackle Derrick Brown from Auburn with the seventh overall pick in the NFL draft, and their hope is he bolsters a unit that was ravaged in free agency and in dire need of an upgrade.

The 6-foot-5, 326-pound Brown was a first-team Associated Press All-American and first-team All-SEC selection as a senior, as well as a finalist for the Chuck Bednarik Award and Outland Trophy. He had 55 tackles and 12.5 tackles for loss along with four sacks, four pass breakups and forced two fumbles for the Tigers

The Panthers were in need of a defensive tackle after Gerald McCoy, Dontari Poe and Vernon Butler left via free agency, leaving Kawann Short as the only returner at that position. Short is a two-time Pro Bowl selection but did not play last season due to a shoulder injury.

The last time the Panthers took a player from Auburn in the first round was Newton in 2011 - and he went on to earn league MVP honors in 2015 while leading the Panthers to the Super Bowl. The Panthers released Newton in a move that saved them more than $19 million under the NFL salary cap.

Shout out to the @Panthers, I’m ready! Gotta start learning that playbook in #Madden20

Who trying to play with me? Leave your gamertag in a comment. #EAathlete pic.twitter.com/GUBfk8OIF6

They have replaced him with Teddy Bridgewater.

The Panthers are coming off back-to-back losing seasons, leading to the firing of two-time Associated Press coach of the year Ron Rivera with four games left in the 2019 season.

The Panthers turned over their defense after allowing 29.4 points per game last season, second-most in the NFL.

Brown gives the Panthers a powerful and strong player who can take up two blockers up front, which should help free up Short, who is considered one of the better defensive tackles in the league when healthy.

The draft is one of the first live sporting events -- albeit done remotely -- since the COVID-19 pandemic put the world as we know it on hold. NFL Commissioner Roger Goodell is announcing the picks from his basement. 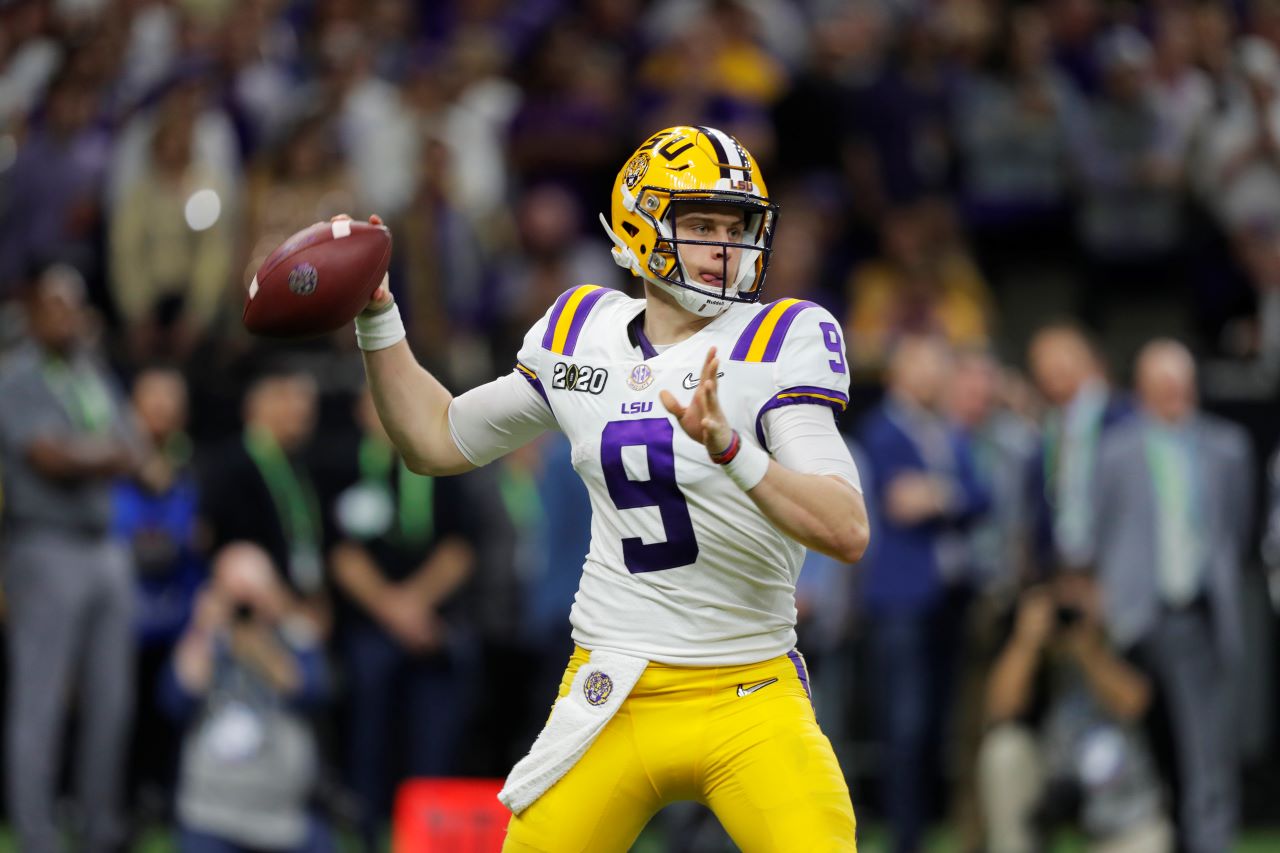 Joe Burrow led LSU to the national championship in perhaps the finest season ever for a college quarterback.

As expected, the Cincinnati Bengals made LSU quarterback Joe Burrow the No. 1 overall pick of the draft.

Burrow, the third straight Heisman Trophy winner taken with the first overall selection, joins a team that went 2-14 in 2019. The Bengals scored 279 points last season, third-worst in the league, and also ranked 30th in total offense.

The previous time Cincinnati grabbed a Heisman quarterback to open the draft, it was Southern California's Carson Palmer in 2003. Palmer led the Bengals to the playoffs twice.

In his spectacular season, Burrow threw for 60 - yes, 60 - touchdowns with only six interceptions. The Tigers beat six top 10 teams on their way to the national title. 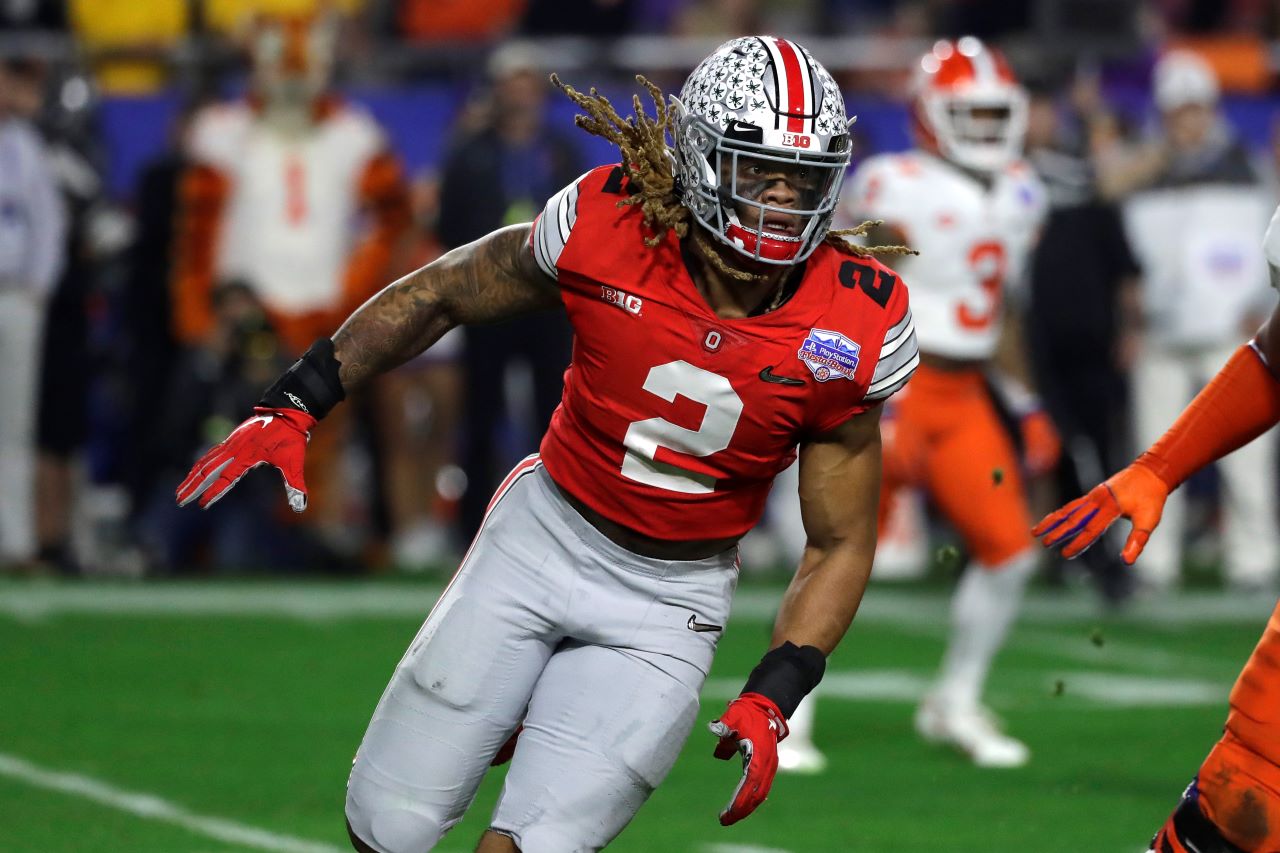 Many scouts and NFL personnel people believed Young was the best overall talent in this draft.

At 6-foot-5, 264 pounds, Young led the nation in sacks with 16 1-2 and forced fumbles with six last season. The All-American won the prestigious Bednarik and Nagurski awards in 2019, leading the Buckeyes to the Big Ten title.

The Detroit Lions grabbed the highest-rated cornerback in this year's draft by taking All-American Jeff Okudah of Ohio State.

A smooth and physical presence on the corner, Okudah can handle all sorts of coverages. He became the 11th Ohio State cornerback taken in the first round since 1999. He figures to start in a division featuring opposing receivers Davante Adams and Adam Thielen. 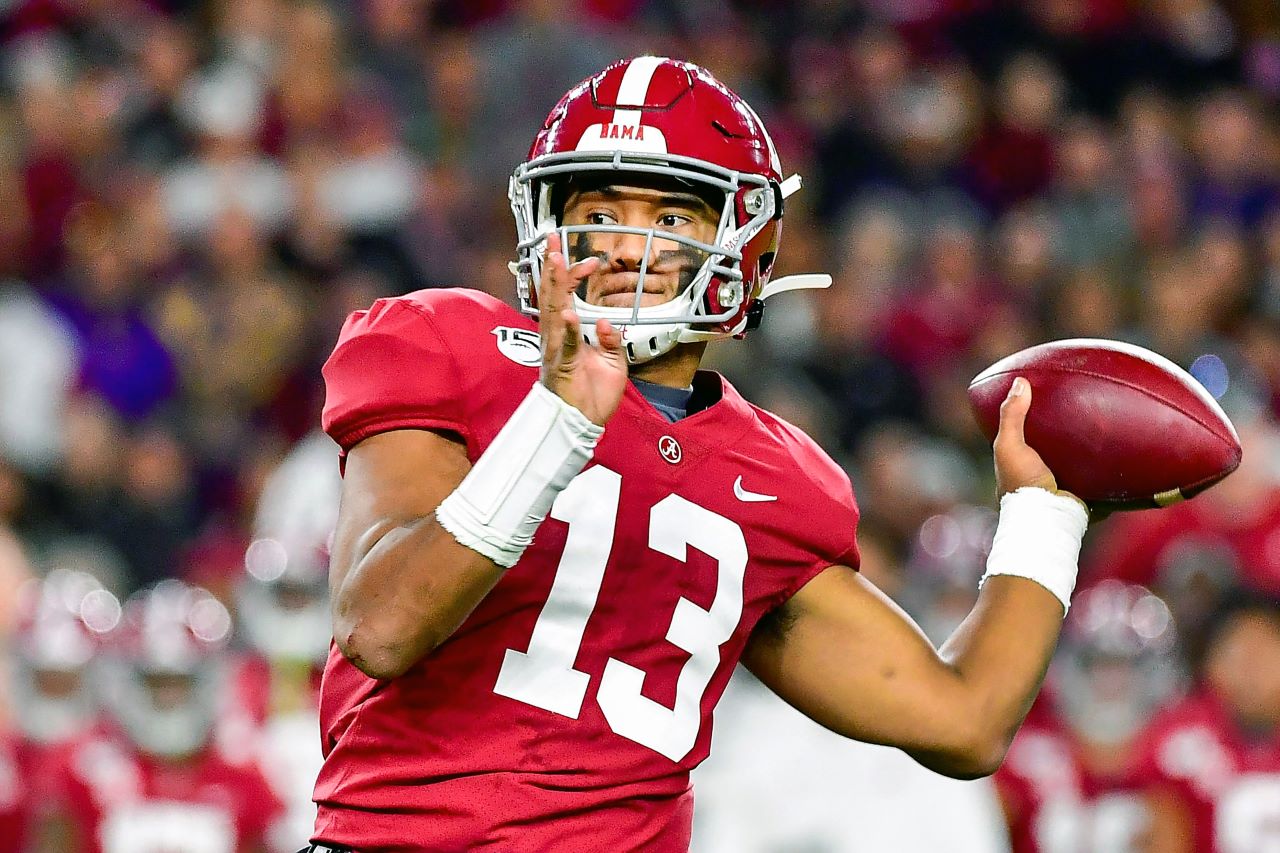 The first offensive tackle in a strong group went off the board fourth overall when the New York Giants selected Georgia's Andrew Thomas. A team leader with the Bulldogs, he can play left or right tackle. Thomas goes 6-foot-5, 315, has strong hands and experience. He was a three-year starter and an All-American last season.

The Giants sought a young tackle to protect last year's first-rounder, former Duke quarterback Daniel Jones. They now have him.

The Miami Dolphins made the splash move the franchise needed by taking Alabama quarterback Tua Tagovailoa at No. 5. Tagovailoa was seen as a bit of a risk coming off a serious injury but his ability and work ethic have not been in question.

Tagovailoa's health issues didn't turn off the Dolphins. The Alabama quarterback, whose resume is as strong as any player in this draft were it not for several injuries in his college career, went fifth overall to a team that was accused going into last season of "Tanking for Tua." Tagovailoa comes off major hip surgery, which made his landing spot one of the first round's biggest uncertainties. A completely healthy Tagovailoa might have been the top overall pick.

Blessed with a quick release, excellent mid-range accuracy and nimble feet, Tagovailoa threw 76 touchdown passes in 24 starts the past two seasons. He helped the Crimson Tide to the 2017 national title.

Herbert had a strong postseason, including a terrific Senior Bowl week that raised his stock. At 6-foot-6, 236 pounds, he has the size the pros like, and he's a good athlete. But he also is not as accurate passing as he'll need to be.

Los Angeles had a burning hole at quarterback after letting go of long-time starter Philip Rivers. Plus, the Chargers plan to move into a new stadium and could use someone to help sell tickets.

A former sixth-stringer for the Ducks, he comes from a football-playing family going back to his grandfathers. 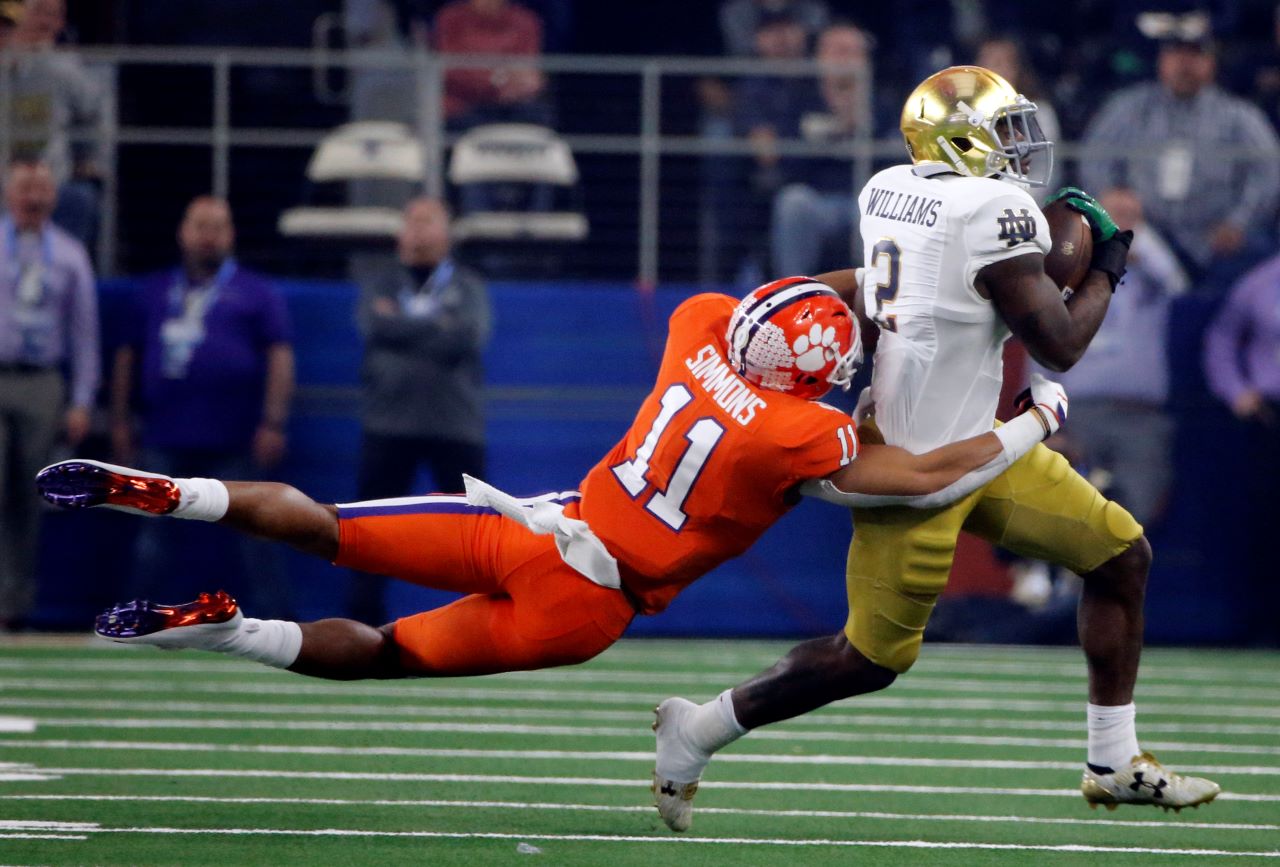 Clemson's Isaiah Simmons is a playmaker all over the field on defense.

Simmons was the Butkus Award winner as the nation's top linebacker last year, but he was used in numerous positions for the Tigers.

He lined up at safety, slot corner and edge rusher at times. He has defensive back speed at 6-foot-4, 238 pounds.

C.J. Henderson doesn't have to go very far for his pro football job. The Florida cornerback was selected ninth overall by Jacksonville. The Jaguars are seeking a solid coverage guy after trading Jalen Ramsey to the Rams last year.

Henderson has good size at 6-foot-1, 204 pounds, and is very quick. He covered the top wideouts the Gators played and usually dominated when healthy - an ankle injury limited him to nine games last season, but he still had 11 passes broken up.

After signing right tackle Jack Conklin as a free agent, the Cleveland Browns added a bookend in the draft with Alabama's Jedrick Wills with the 10th pick.

Quarterback Baker Mayfield must be smiling at those moves.

How good a pass protector is Wills? He allowed one sack in 39 college games, playing exclusively at right tackle. Of course, the Crimson Tide had a left-handed QB, Tua Tagovailoa, so Wills was protecting the blind side.

Look for him to move to the left side and do the same for Mayfield.

Sam Darnold has a protector.

Louisville's massive but quick Mekhi Becton, who at 6-foot-7, 365 pounds ran a 5.1-second 40 at the scouting combine, is headed to the Jets.

General manager Joe Douglas promised he would find a target and a blocker for his third-year quarterback. Becton, who went 11th overall, has a 7-foot wingspan.

The first pick in the history of the Las Vegas Raiders was next and made plenty of sense. Coach Jon Gruden loves speed, and in Henry Ruggs III of Alabama, he has a burner who finds the end zone.

The draft had been scheduled to take place in the glitz and glamour of Las Vegas but all the live festivities were canceled when it became apparent that holding live events as the virus spread was not feasible.

Six teams are scheduled to sit out the first round of the NFL draft, though that could be a mirage.

The Colts, Rams, Texans, Bills, Bears and Steelers don't own opening-round picks after previous trades. They certainly could trade back into the round, which could, of course, cost them next year's top selection.

Indianapolis gave up the highest spot when it traded for the 13th pick to San Francisco for defensive tackle DeForest Buckner, who then signed a new contract worth about $21 million per year.

The Dolphins, who have three first-round selections, got No. 18 overall from Pittsburgh for defensive back Minkah Fitzpatrick, who was a star for the Steelers in 2019.

The 19th spot belongs to Las Vegas - that's the Raiders, folks - as part of the 2018 deal that sent Khalil Mack to Chicago. No. 20 belongs to Jacksonville in exchange for cornerback Jalen Ramsey, a deal made during last season with the Rams.

Buffalo acquired wide receiver Stefon Diggs from Minnesota for the 22nd spot, and Miami has Houston's slot, No. 26, from last year's deal for tackle Laremy Tunsil.

ESPN ANALYST OUT WITH CORONAVIRUS

ESPN analyst Todd McShay said he won't be part of the network's broadcast of the NFL draft because he's recovering from the coronavirus.

McShay said in a statement that he'd be back and thanked the tireless work of health care workers and first-responders, calling them "truly our nation's heroes."