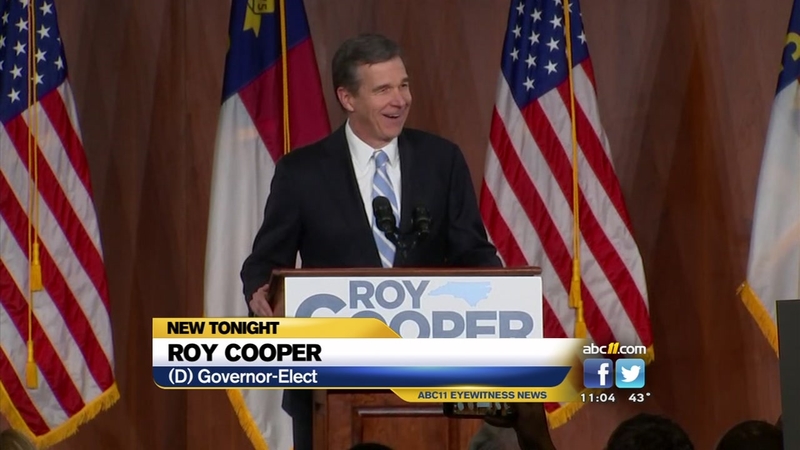 RALEIGH (WTVD) -- Governor-elect Roy Cooper said he's ready to get to work. He hosted a victory rally to thank his supporters at the McKimmon Center on NC State's campus Tuesday night.

It was a short but well-received speech as he vowed to repair the reputation of North Carolina by repealing House Bill 2.

A spokesperson for Cooper's campaign said about 650 people filled the room for the victory rally.

After weeks of ballot protests and a recount in Durham ending with nearly the same results, Gov. Pat McCrory conceded the very close race just one day before Tuesday night's rally.

Cooper's speech was about 15 minutes long, but packed with plans for North Carolina.

"With this election, North Carolina is on its way to repairing its reputation. Let's finish the job and repeal HB2," Cooper said to a crowd that then erupted in cheers.

"I want to make sure that North Carolinians are healthy, both physically and mentally, that law enforcement is strong and fair, that women and their rights are respected, that voting is easier," Cooper said, "that local governments have more freedom to shape their own policies and that middle-class taxpayers and small businesses are the ones who get the breaks."

He also talked about raising wages.

"I want to make sure educators and state employees are properly paid," Cooper said. "I will fight for those workers whose expenses are growing but their incomes are not."

Governor-elect @RoyCooperNC takes stage at his thank you rally "Tonight we are here to celebrate"-Cooper pic.twitter.com/owuU9tdHro

He said he also plans to fight for clean air and water as well as a strong economy. On Hurricane Matthew, he said it will take teamwork to work toward recovery.

"I want North Carolina to be one of the most admired states in this country," Cooper said.

These are plans those in the crowd Tuesday night said they've been waiting to hear.

"Maybe we can get our ACC Tournament back, our NCAA games back," said supporter and Raleigh resident, Phillip Cooper, no relation to the governor-elect.

"It's really feeling like we have a lot of positive momentum going into this," said NC State graduate, Zach King.

"I can't wait to get started," said Cooper to end his speech, "Enjoy tonight, for tomorrow, we get to work."