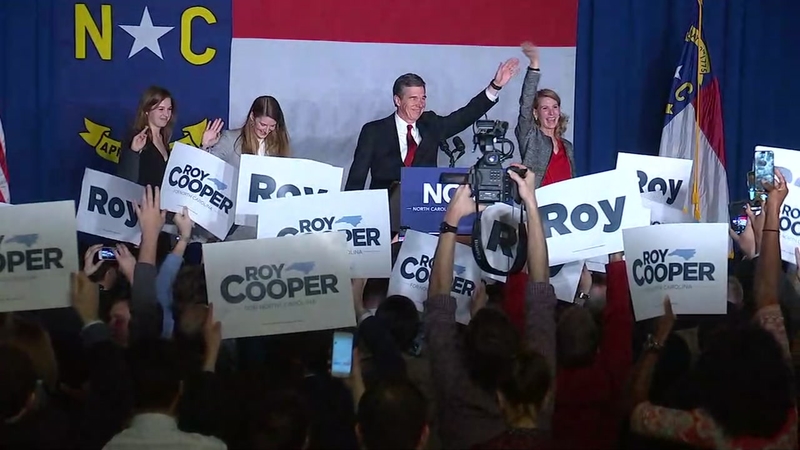 
Roy Cooper gets huge applause: "We have won this race for Governor, I'm glad you stayed." Promises victory when all ballots are counted. pic.twitter.com/kT0HNAoCgY

Related story: North Carolina's governor race too close to call. So now what?

After a night when the lead went back and forth between incumbent Republican Pat McCrory and his challenger, Cooper led by about 5,000 votes Wednesday.

Early unofficial results had Cooper with a very slight lead, but McCrory moved ahead just before 9:30. A little before midnight, a large block of Durham votes were uploaded, putting Cooper slightly ahead.

Both candidates came out to speak to supporters around 12:30 a.m. McCrory said about 90,000 early votes in Durham County weren't counted until the last minute.

He said there are likely thousands of provisional ballots in counties across the state that have yet to be counted and he doesn't expect the final results to be known until an official canvas of votes November 18.

He vowed to make sure every vote is counted.

"We've got to respect the election system," he said.

Wednesday, McCrory Campaign Strategist Chris LaCivita said the campaign has concerns about the last-minute addition of so many votes from Durham County.

"The votes have been cast in the gubernatorial election, but many have yet to be counted. Currently, there are tens of thousands of outstanding absentee, military and provisional ballots across the state, and claiming an outcome before the process has concluded is irresponsible and disrespectful to the voters of North Carolina whose voices have yet to be heard. We also have grave concerns over potential irregularities in Durham County, including the sudden emergence of over 90,000 ballots at the end of the night," he offered.

The race has become a referendum on North Carolina's rightward shift under McCrory, highlighted by a law that limits anti-discrimination protections for lesbian, gay, bisexual and transgender people and directs transgender people to use public restrooms matching the gender on their birth certificates. Cooper has vowed to try to repeal the law as governor.

Recent flooding from Hurricane Matthew has also played into the race, as McCrory has been at the public forefront of response and recovery efforts.