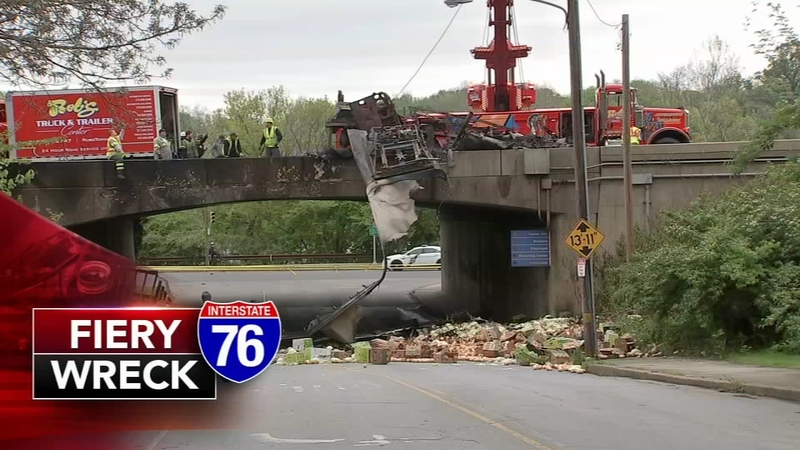 PHILADELPHIA -- A teenager was driving recklessly before a fiery crash that killed a tractor-trailer driver in Philadelphia early Wednesday, Pennsylvania State Police have said.

It happened around 2:40 a.m. in Fairmount Park.

State police say 19-year-old Zamir Abdul-Johnson of Philadelphia was attempting to exit I-76 eastbound in a 2018 Toyota Yaris when he missed the exit. Police say Abdul-Johnson then attempted to travel in reverse and lost control, hitting the driver of a tractor-trailer, identified by authorities as a 54-year-old man from Jacksonville, Florida.

The cargo and part of that trailer caught fire and a portion fell over the expressway and down onto Sweetbriar Drive. What looked like cabbage and squash were seen strewn about the roadway below.

The tractor-trailer driver died in the wreck.

Chopper 6 over the scene of a fiery crash on the Schuylkill Expressway.

Abdul-Johnson and two juvenile females inside the Toyota were located at the hospital. Police say the vehicle was stolen.

Abdul-Johnson will be charged with homicide by motor vehicle, driving under the influence and other offenses.

The expressway was shut down for hours near the crash scene as police conducted their investigation.