Future of several Confederate monuments in NC still in limbo 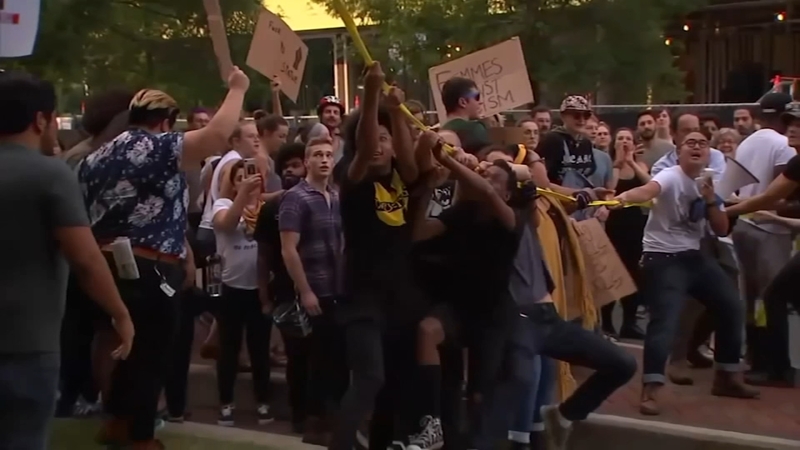 Future of several Confederate monuments in NC still in limbo

The debate about Confederate monuments intensified this weekend in Chatham County. Nearly a dozen people were arrested after a brawl in Pittsboro.

Meanwhile, ABC11 learned that the future of several of these monuments in our area is still undecided.

Students still have strong opinions about whether Silent Sam should be brought back, housed in a museum or gone altogether.

"I definitely lean more towards it being gone entirely," said UNC Student Uzorma Owete. "I can see the merits of it being placed in a memorial position, but I just think it's not a good thing for it to be where it was."

"I think it should be gotten rid of," said UNC Student Carson Berry. "It definitely doesn't need to go back up on campus."

"I think we need to be honest about our history but not in a way that's going to make people feel uncomfortable," said UNC Student Peyton Furtado.

Students we talked to want to know the plan sooner rather than later.

"I would rather have some closure before I graduate," Berry said.

Protesters pulled down the Confederate statue outside the old courthouse in Durham two years ago.

Almost a year ago, a committee recommended displaying the damaged statue indoors and explaining the history leading to its fall. But County Commissioners still haven't voted on the plan.

The North Carolina Historical Commission voted to add context to Confederate monuments at the state capitol such as historical information about slavery.

How exactly it will be done still needs to be voted on and there's no deadline for that.

The North Carolina Department of Natural and Cultural Resources' Office of Archives and History has completed research on the issue of contextualization and is now in the process of drafting a report to be presented to the NC Historical Commission for review, said department spokeswoman Michele Walker.

However, Walker said it's unclear when exactly that will happen and that the date for the next meeting also hasn't been decided, although the commission meets quarterly.

Lindsay Ayling, 32, of Chapel Hill was arrested in this weekend's brawl and charged with simple assault. She was previously outspoken about Silent Sam's presence on Chapel Hill's campus.