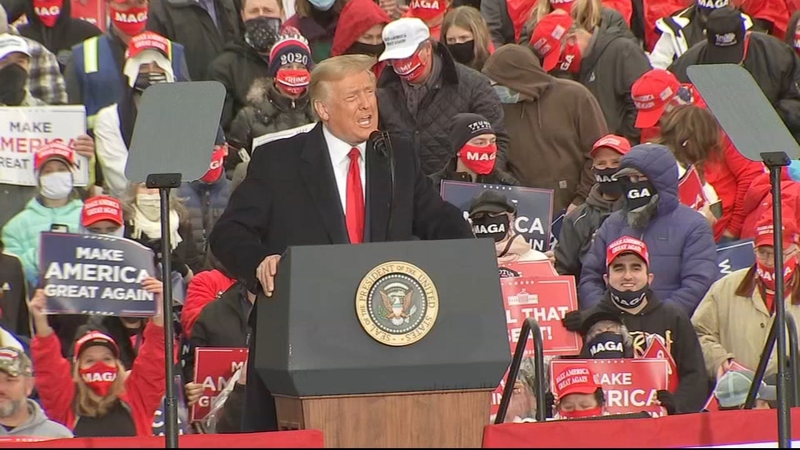 HANOVER, Pennsylvania -- President Donald Trump embarked Monday on a final-week charge through nearly a dozen states ahead of the election, overlooking a surge of coronavirus cases in the U.S. and a fresh outbreak in his own White House. His Democratic rival, Joe Biden, is holding far fewer events in an effort to demonstrate that he's taking the worsening pandemic seriously.

The final days of the campaign are crystalizing the starkly different approaches Trump and Biden have taken to address the worst public health crisis in a century - with risks for each candidate.

For Trump, the full-speed-ahead strategy could spread the virus in places that are already setting new records and leave him appearing aloof to the consequences. And if Biden comes up short in the election, his lower-key travel schedule will surely come under scrutiny as a bad choice.

President Trump is set to make three campaign stops in Pennsylvania Monday, one of which is in the Lehigh Valley.

Both men are making points with their travel plans. Trump was holding three events in Pennsylvania alone on Monday, suggesting he's on defense in a state that he won in 2016 and that will be critical to his reelection. Biden, meanwhile, is demonstrating more confidence with signals that he's hoping to expand his campaign map.

Though the Democrat was remaining close on Monday to his Wilmington, Delaware, home, on Tuesday he will visit Georgia, a state that hasn't voted for a Democratic presidential candidate since 1992. He's dispatching his running mate, Kamala Harris, later this week to Texas, which hasn't backed a Democrat for the White House since Jimmy Carter in 1976.

With more than a third of the expected ballots in the election already cast, it could become increasingly challenging for Trump and Biden to reshape the contours of the race. But both men are fighting for any endgame advantage. Biden is leading Trump in most national polls and has an advantage, though narrower, in many key battlegrounds.

While the final week of the campaign is colliding with deepening concerns about the COVID crisis in far-flung parts of the U.S., Trump is anxious for voters to focus on almost anything else. He's worried that he will lose if the election becomes a referendum on his handling of the pandemic. Biden, meanwhile, is working to ensure the race is just that, hitting Trump on the virus and presenting himself as a safer, more stable alternative.

The stakes were clear this past weekend as the White House became the locus for a second outbreak of the virus in a month. Several close aides to Vice President Mike Pence tested positive, including his chief of staff, Marc Short. Pence, though, was insistent on maintaining his aggressive political calendar, even though he was deemed a "close contact," claiming the status of an "essential employee."

The latest national outbreak has provide a potent sign of the divergent approaches the Trump and Biden campaigns have taken to the virus. On Sunday, White House chief of staff Mark Meadows said that "we're not going to control the pandemic" and the focus should be on containment and treatment. Trump aims to pack thousands of people, most without face coverings, into rallies across some of the upper Midwestern states bearing the brunt of the surge.

Biden, in a statement, said Meadows' comments continued with the Trump administration waving "the white flag of defeat" in the face of the virus.

Trump fired back Monday as he arrived in Pennsylvania, saying Biden, with his concerns about the virus spread, has "waved a white flag on life."

Biden's team argues the coronavirus is likely to blot out any other issues that might come up in the final days of the campaign - including his recent debate-stage comment in which he affirmed he'd transition away from oil, later walking that back as a transition away from federal subsidies. That strategy appeared to pay off as the outbreak in Pence's staff refocused the national conversation once again on the pandemic.

Trump and his team, meanwhile, have struggled to settle on a closing message, with the undisciplined candidate increasingly trusting his instincts over his advisers. He's grasped for dirt on his Democratic rival and used apocalyptic terms to describe a Biden presidency, but Biden has thus far proven more resistant to such attacks than Trump's 2016 rival, Hillary Clinton.

"You can certainly expect that (Biden) will focus on COVID as it continues to, unfortunately, rise all across the country," Biden deputy campaign manager Kate Bedingfield said in an interview. "It is disrupting people's lives and people are looking for a leader to put in place plans to get it under control."

Anticipating a razor-thin Electoral College margin, Trump has an aggressive schedule including a visit Omaha, Nebraska, Tuesday after a Sunday visit to Maine, aiming to lock up one electoral vote in each of the states that award them by congressional district. Trump is scheduled hold a dizzying 11 rallies in the final 48 hours before polls close.

Biden is sitting on more campaign cash than Trump and is putting it to use, blanketing airwaves with a nearly 2-to-1 advantage over the final two weeks. The incessant campaign ads feature both upbeat messages and blistering criticism of Trump's handling of the pandemic.

It's part of what Josh Schwerin, the senior strategist for Democratic super PAC Priorities USA, says has helped Biden gain an advantage.

"Those dual messages - continuing to draw a contrast with Trump, but also offering that positive aspirational message, giving people a reason to vote for Biden and not just against Trump - continues to be the best way forward. And we're seeing it work," he said.

Democrats have been heartened by their lead in the record numbers of early votes that have been cast across a number of battleground states - though they caution that Republicans are more likely to turn out on Election Day and certain to make up ground.

Multiple Democrats describe the "2016 PTSD" that's keeping them up at night. Four years ago, Clinton also enjoyed a lead in national and some state polls, and Democrats say their complacency doomed their candidate. Now, Democrats are reluctant to let their guard down.

Said Bedingfield: "We do believe the race is tighter than a lot of the public polling would suggest."