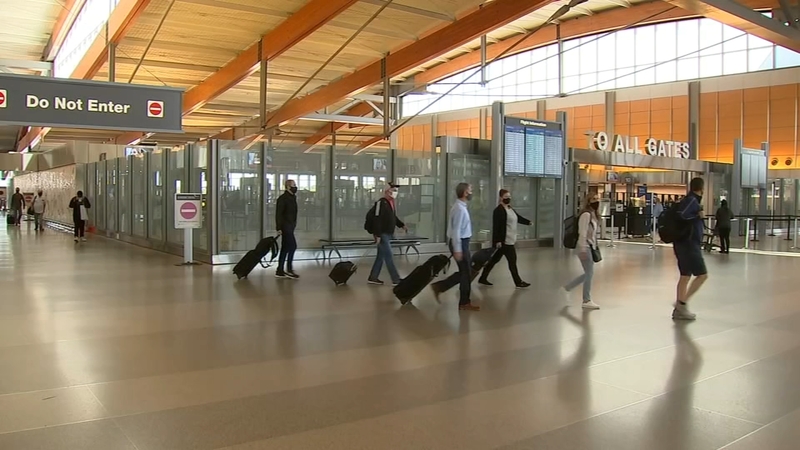 RDU in 'recovery mode' from pandemic as Apple moves to RTP

RALEIGH, N.C. (WTVD) -- RDU International Airport is recovering from the massive toll air travel took during the pandemic, hopeful with Apple moving into the neighborhood, business travel will finally begin to tick up.

A timeline for construction on Apple's new RTP campus has not been released; a spokesperson said hiring will begin immediately.

The tech giant's announcement that it's bringing more than $1 billion in investments and 3,000 jobs comes just RDU is rebounding from the pandemic.

In 2020, RDU reported only 5 million passengers came through its doors, the lowest level since 1987.

The airport was forced to operate on half its budget, putting nearly $150 million worth of construction project on hold, said Stephanie Hawco, RDU spokesperson.

But now, things are looking up.

Pre-pandemic, RDU offered 58 non-stop routes including five international destinations; that was reduced to 21 non-stop flights, none of them international.

"We are very happy to see a lot of announcements coming out lately about new routes, about cities being added," said Hawco. "We've got international leisure flights back to markets like Cancun and Montego Bay, Jamaica."

Hawco said American and Delta are bringing back flights to London and Paris.

In the next two months, Jet Blue and United will launch flights to San Francisco.

"That's a big deal for us," Hawco said. "You see cities like San Francisco, which is a major technology hub and companies like Apple have a presence there so there's a very strong tie and we're just thrilled to have that connection coming back."

Plans to replace RDU's primary runway were literally cut short during the pandemic.

Instead of building an 11,500 foot long runway to accommodate larger planes, RDU will replace the existing 10,000 foot runway with one just like it, Hawco said, with the option to extend in the future should demand return for flights to Asia.

With air travel evenly split between business and leisure before the pandemic's onset, Hawco said it's now two-thirds leisure.

She's hopeful business travel will make a comeback as the vaccine rollout continues and Apple moves in.

"We hope that companies like Apple and other companies in the Research Triangle region will get back to business travel, and we believe they will," Hawco said.