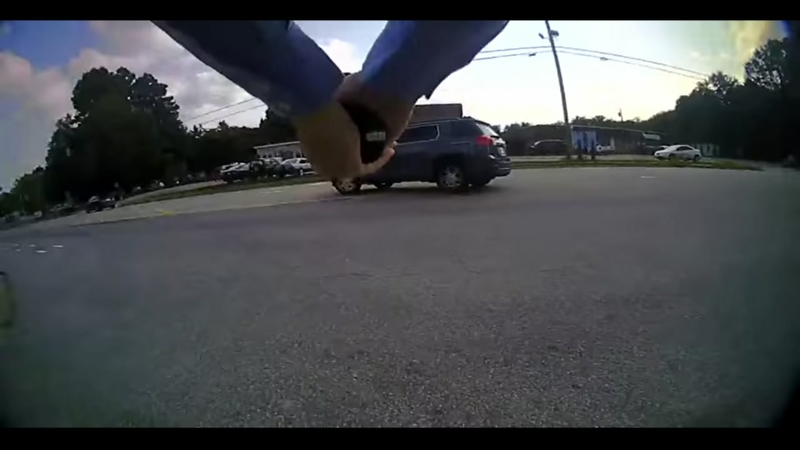 Police said it began when officers spotted a car that had been reported stolen from the 1000 block of North King Charles Boulevard and attempted a traffic stop shortly before 4:30 p.m.

When the stolen vehicle came to a stop, Sgt. S.A. Brown activated his lights and got out of his car in order to give commands to the driver.

As Senior Officer J.C. Vucich, who was nearby, got out of his vehicle to help, the suspect, 22-year-old Ronie Demitri Hyman sped off.

Hyman was not hit.

Watch the videos below:

In court last month, Hyman's own attorney said the man is a danger to himself and the public.

"We've been trying to figure him out for a couple years and we haven't quite gotten there," said assistant DA Howard Cummings.

Hyman was charged with larceny of a motor vehicle, felony speed to elude, hit and run, and careless and reckless driving.

The chase ended in a fiery crash on Western Boulevard near Gorman Street.

William Gay, who was headed to downtown Raleigh on his bike when he was caught in the middle of the pursuit, said he saw the GMC hit various road signs before it caught on fire.

Another witness, Keesh Jackson, was driving by Pullen Park. Next thing she knew, she had to swerve out of the way.

"He was about to hit my passenger side, so I had to move out of the way some," Jackson said. "Every time he turned, the police turned so it was like I just in a circle. I couldn't go anywhere. I was scared because I almost lost my life in a matter of seconds."