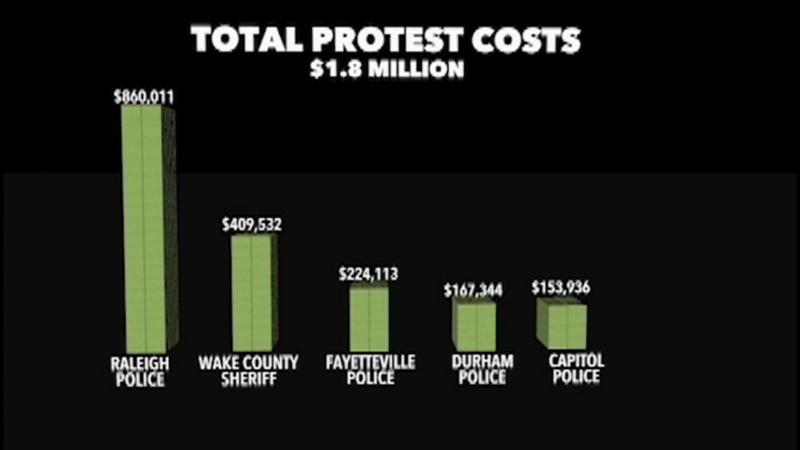 RALEIGH (WTVD) -- Citizens are free to protest in the United States but it doesn't quite come without a price tag.

In the days after George Floyd's death, thousands of North Carolina residents took to the street to demand equality and justice. From protests to riots, local police departments racked up overtime costs deploying officers.

The Raleigh Police Department reported officers worked more than 2,300 hours from May 30 to June 8. While the department said it is still calculating the total expenses, its overtime costs totaled to $860,011.

You’re free to protest in America but it doesn’t quite come without a price. Tonight on @ABC11_WTVD at 6 a look into how much police depts. spent in the wake of George Floyd’s death. pic.twitter.com/ID9QQhW6pQ

A quarter of the total cost stemmed from a single day, May 31, when the agency spent $100,000 deploying nearly 200 deputies. Capitol Police also assisted in keeping the peace.

The state reported personnel and overtime costs totaled $153,000. Based on the costs reported so far, protests in Raleigh cost agencies a total of $1.4 million.

A majority of Durham's $167,000 was for overtime but the department also spent money on food, supplies and graffiti removal.
The Durham Sheriff's Office told ABC11 it is still calculating its expenses related to the protests.

The Fayetteville Police Department spent around $224,000.

The city contracted with the National Guard and was responsible for troops' food and housing, an expense that added up to around $11,000.

One of the department's vehicles also suffered minor damage but the cost for repair is not yet finalized.