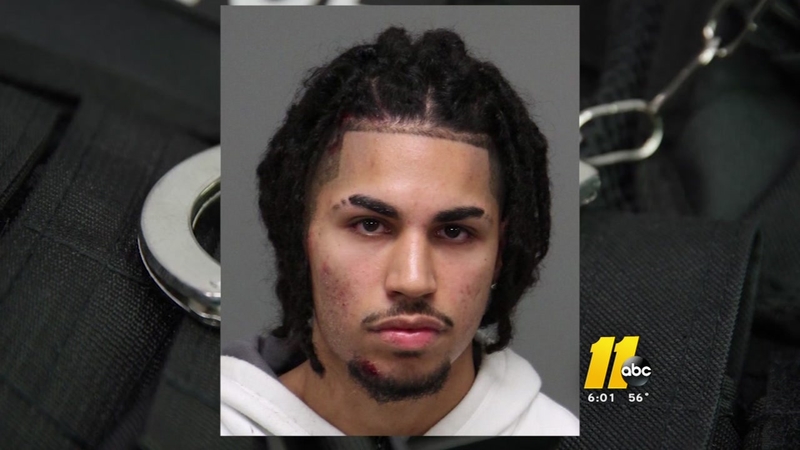 RALEIGH, North Carolina (WTVD) -- Kyle Garcia told ABC11 he thought his life was in danger while being arrested by a Raleigh police officer earlier this month.

Garcia said bruises on his head, face, and knees came from a violent encounter two weeks ago with a Raleigh officer.

Garcia said he was parked by an air pump at a Sheetz station on Ramble Way when he was approached by officers demanding he get out of his car.

"My trunk was popped open. I barely moved a muscle. All I did was close my trunk. He immediately started to punch, kick, elbow," Garcia said. "He slams me on the ground and he stomped my head repeatedly."

Garcia also said the officer didn't read him his Miranda rights during the arrest.

Editor's note: A Raleigh Police spokesperson clarified on Tuesday that officers do not have to read Mirando rights at time of arrest, only during custodial interrogation.

The 22-year-old Garcia was taken into custody and charged with possession of marijuana.

Garcia is now out of jail and back to work on a pretrial release. He says his physical scars are healing, but the emotional wounds are still fresh.

"I'm not saying that every police officer is an animal," Garcia said. "In his case, I just want them to look further into it."

Raleigh Police told ABC11 that it is looking into Garcia's claims of excessive force.

A spokesperson told ABC11 by email that RPD would investigate whether security cameras at the Sheetz or the officer's dash cam captured footage of the incident.

RPD told ABC11 it is still in "the contract phase" of body-worn cameras, so officers are not yet equipped with those.

Garcia wants a thorough investigation. He also plans to file a complaint.

"As a young man, I feel like I have to fear for my life when I see a police officer," Garcia said.

Raleigh Police confirmed to ABC11 that there has not a complaint filed against the officer, who was identified by RPD as Officer M.R. Wigger.

"However, we are investigating Mr. Garcia's allegations as brought to our attention by the media," RPD said.

RPD said it has received just six excessive-force complaints out of 297,534 "officer/citizen contacts" for 2017 to date.

ABC11 has decided to slowly reduce the number of stories on the website that have a comments section. We believe very strongly that our audience should have an opportunity to discuss and debate events in our world, however, we have not been able to moderate the comments as well as we would like. Instead of hosting a platform that could allow a few loud and ugly voices to dominate a conversation, we want to encourage everyone to join us on our social media platforms and speak out there. Facebook: facebook.com/ABC11 Twitter: twitter.com/ABC11_WTVD
Report a correction or typo
Related topics:
raleighwake countymarijuanaarrestpolice brutalityexcessive forceraleigh police
Copyright © 2022 WTVD-TV. All Rights Reserved.
TOP STORIES
1 killed, 5 wounded in shooting at California church: Authorities
Buffalo, NY shooting suspect may have planned attack months before
Milk banks interest spike as baby formula shortage continues
John Fetterman suffers stroke days before Pennsylvania Senate primary
Panic in crypto market has Janet Yellen's attention
Suspect fired 50 rounds in supermarket hate crime shooting that kil...
10 killed in Buffalo supermarket attack police call hate crime
Show More
Record 19,513 fans pack PNC Arena for Hurricanes Game 7
Historic Durham high school celebrates centennial
A total blood moon eclipse is happening this weekend: How to watch
Family of man shot, killed by Raleigh police speaks out
Russians stymied in Ukraine; Finland favors joining NATO
More TOP STORIES News