'He was not a threat': Protest in downtown Raleigh one month after RPD deadly I-440 shooting 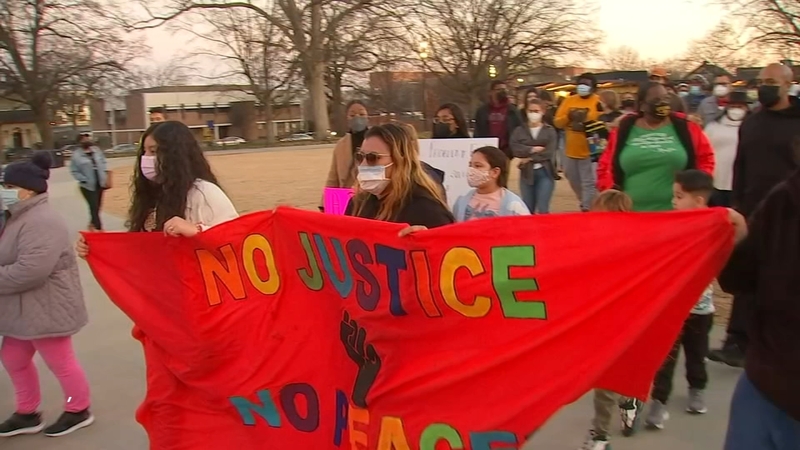 'He was not a threat': Protest in Raleigh over RPD I-440 shooting

RALEIGH, N.C. (WTVD) -- There were passionate pleas on the streets of downtown Raleigh on Thursday night, as the family of Daniel Turcios joined with supporters to condemn Raleigh Police for what they say was police brutality.

Turcios was shot and killed by RPD officers last month after crashing his car on the Raleigh Beltline. On Thursday night, demonstrators marched and rallied in Moore Square. By the dozens, they stepped out of the square and took their message to the streets with signs and loud bullhorn-blasting chants for justice.

Six days after Raleigh Police released the officer bodycam videos from Jan. 11 on I-440, Turcios' family and supporters rejected RPD's narrative of what happened in those moments after Turcios' car went off the road in a violent rollover crash with Turcios, his wife, and their two children all inside.

Turcios' widow, Rosa, reframed what happened from the family's point of view. She told the crowd that she and her husband has just been involved in a near-fatal crash; he was briefly knocked unconscious and was still out of it when RPD arrived.

But she said that instead of treating Turcios as a crash victim, officers treated them as suspects.

"After our car flipped, Daniel was not fully aware of our surroundings. And he was having trouble communicating," she said, insisting a language barrier prevented her husband from complying with commands.

"Because Daniel did not understand the commands, the officers tased him and shot him five times. Daniel did not deserve to die," she said. "He was not a threat. He was confused after experiencing a traumatizing car accident. Instead of helping Daniel when he needed it the most, the officers killed him."

“He was not a threat. He was confused after experiencing a traumatizing car accident.”

Daniel Turcios’ family and protesters rally in downtown Raleigh one month after Turcios was shot and killed by RPD officers following a rollover crash on the beltline. #abc11 pic.twitter.com/YWCGlneTkR

Raleigh police said Turcios posed a threat. He's seen in the bodycam video holding a knife. At one point he's seen swinging it toward officers. He ignored numerous commands to drop the knife.