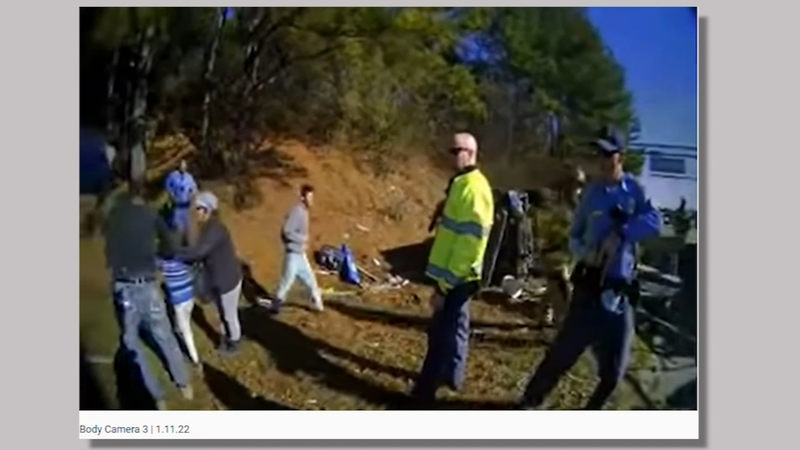 RPD releases video of police shooting on I-440

RALEIGH, N.C. (WTVD) -- Raleigh Police released the body camera videos of an incident last month where a father of three was shot and killed by police after he ignored commands and struggled with officers.

A judge supported and granted the release during a court hearing Wednesday, however, RPD said it would not release the videos that day.

RPD planned to allow Daniel Turcios' family to view the videos prior to them being released publicly. However, the family declined.

RPD ended up publishing the videos Friday through its YouTube page.

WARNING: The video below contains explicit and graphic content not suitable for all viewers.


The above video is a summary video where police combined footage from different cameras at the scene.

Turcios can be seen on the side of I-440 after the Jan. 11 crash. He is heard speaking exclusively Spanish and at times appearing to argue with his family.

Other people at the scene can be heard telling police Turcios appeared intoxicated and had previously been speeding. Police said they were also informed that Turcios ran someone off the road.

In the video, Turcios appears agitated and tells arriving officers and others in Spanish that the other driver was "giving him the finger."

Turcios' family denies that he was intoxicated, speeding or responsible for running anyone off the road.

Several minutes into the video, Turcios can be seen holding a knife. Officers repeatedly told him to drop the knife, speaking both in English and Spanish, but he refuses.

He later picks up his injured child and tries to take him away from the scene. Turcios' wife intervenes and gets her husband to put their child down.

But Turcios continues to walk away from the crash site. That's when officers hit him with a stun gun, knocking him to the ground.

Officers then surround Turcios and try to place him into custody. However, he struggles against the officers. Video shows him swinging his hands while trying to get up and keep officers off of him. In one of his hands is the knife.

Raleigh Police Department said Turcios' knife did not injure any of the officers during this struggle.

The initial tussle with officers ends abruptly when an officer shoots Turcios and he falls to the ground. All of the officers back away after the first shots are fired.

Turcios is on the ground with no officers immediately next to him, as they stepped back slightly when the first shots were fired. He then tries to get up with the knife still in his hand; he makes it to his knees before the officer shoots him three more times.

Those last shots prove to be fatal.

Turcios' family held a news conference Friday just before the release of the video.

They have previously said officers should have done more to de-escalate the situation.