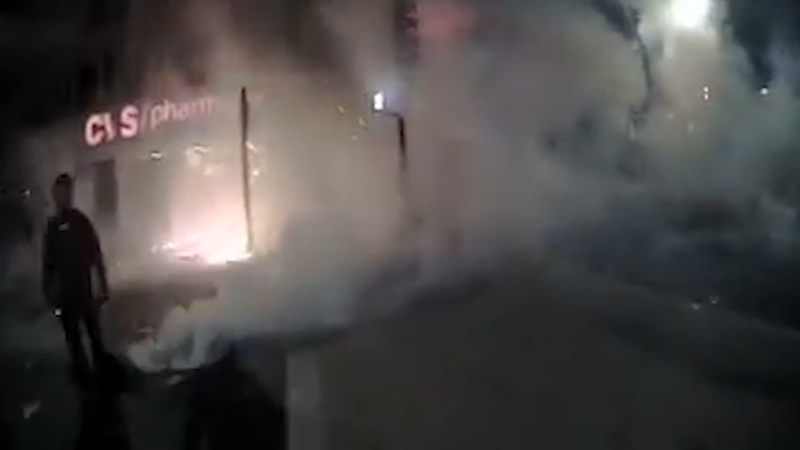 RALEIGH, N.C. (WTVD) -- The Raleigh Police Department posted 583 videos to its Youtube page Tuesday afternoon, revealing dash and body camera footage from demonstrations across the city between May 30 and June 1.

The footage includes protests at North Hills, Pointer Place and in downtown Raleigh.

In a news release, city officials said they joined Police Chief Cassandra Deck-Brown in petitioning the Superior Court to release all videos that captured interactions between officers and demonstrators during the protests.

While some of the videos are just a few seconds long, others are more than two hours.

In one video, several loud bangs are heard as officers clash with demonstrators, however, it is unclear what exactly is happening because the body camera capturing the event is blocked by the officer's baton.

In another video, officers push a line of protestors back with batons--one officer even diving toward the crowd as the officers repeatedly ask the assembled demonstrators to back up.

All of the videos are available on the department's YouTube page here. The department also separated the videos into several playlists based on date and location.

Raleigh activist Kerwin Pittman was glad the videos were released but says he was hopeful for swift transparency.

"Did they pick out the best of the best? Something that will make them look better in the public eye? Did they really realize these videos months later because of transparency," said Pittman.

Pittman said this is further cause to advocate for changes to the criminal justice system.

"As we know as time lags, accountability lags," Pittman said. "For these types of military tactics to be utilized against civilians--against those who are just standing up for their rights in the 21st century is troubling enough to say the least."