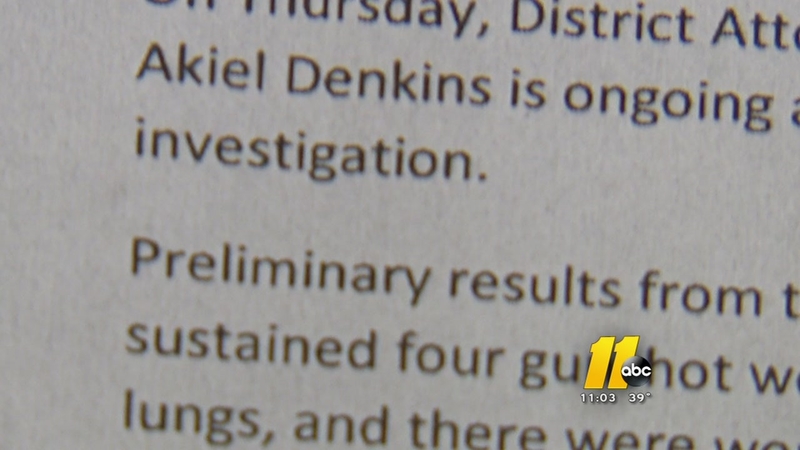 RALEIGH (WTVD) -- The preliminary report on Monday's shooting involving a Raleigh police officer was released Thursday afternoon, and while it shed some light on the case, many questions remain unanswered.

The autopsy does not say if the wounds outside of the chest area were to the front or back.

Speaking to reporters Thursday evening, Wake County District Attorney Lorrin Freeman said: "that is not information that the state medical examiner has authorized to be released yet."

The report states: There was a wound of his right chest with injuries of his heart and both lungs, and there wounds of his left forearm, right upper arm, and right shoulder."

Freeman said the medical examiner still has more work to do looking at the wounds before saying more.

"We too very much want that report I assure you," said Freeman.

In a statement released with the autopsy, Freeman said: "A thorough investigation takes time and I continue to urge the community for its patience as we continue."

Denkins' mother, Rolanda Byrd, has said her son was shot in the back while running away from police near Bragg and East streets just after noon Monday.

The 5-day report lays out what investigators say happened step by step.

The report says Officer Twiddy spotted Denkins on Bragg Street near Mangum Street and recognized that he was wanted on an outstanding drug warrant. He got out of his car and approached Denkins who ran off when Twiddy told him to stop.

Twiddy ran after Denkins. The chase went over one fence and Denkins tried to climb a second when Twiddy caught up to him. Denkins stopped climbing and approached Twiddy.

Raleigh's police union has said Officer Twiddy fired in self-defense. In a statement to ABC11, the union said "on Monday, officer Twiddy had to do the hardest thing that is sometimes required as a police officer... We believe that officers don't leave their rights at home when they put on their uniform... Police officers have the right to self-defense."

While Twiddy's car was equipped with a dash camera, the 5-day report says he did not turn on his blue lights before getting out of his car. The camera is only activated when the lights are on.

The SBI and Raleigh detectives have canvassed the area for anyone who may have seen the shooting, but no eyewitnesses have come forward. Multiple people reported seeing the beginning of the foot pursuit and to hearing the shots. Police are asking any witnesses who may have seen anything - and who have not spoken with investigators - to come forward.

Twiddy suffered "minor abrasions during the encounter, but was not seriously injured," according to the 5-day report.

The handgun found at the scene was reported stolen Jan. 31.

"Any fingerprints, DNA, or other evidence recovered from the weapon will be reported directly to the District Attorney by the SBI as a part of their criminal investigation," reads the report.

Officer Twiddy is on administrative leave pending the result of the investigation, which is standard procedure.

When completed, the SBI investigation will be presented directly to the Wake County District Attorney. Freeman will review the findings before determining any potential criminal charges.

The funeral for Denkins is set for Friday at 1 p.m. at Bible Way Temple on Holmes Street in southeast Raleigh.