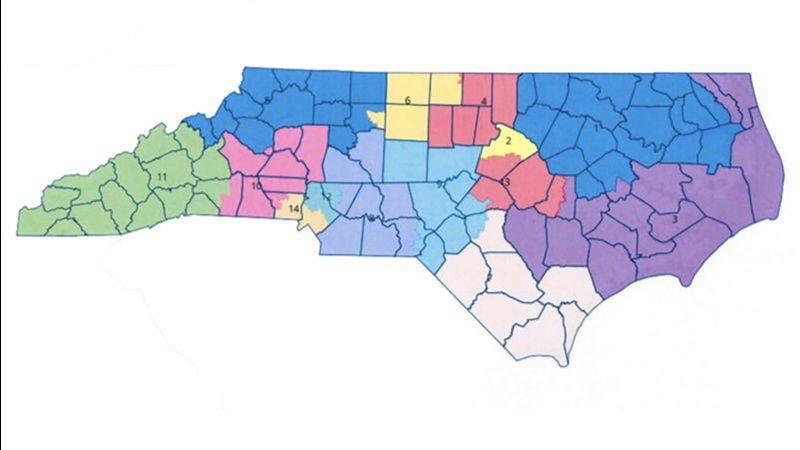 RALEIGH, N.C. (WTVD) -- Republicans in the General Assembly are appealing to the U.S. Supreme Court to halt the implementation of the new congressional map which was drawn by "Special Masters" appointed by a panel of judges from Wake County.

This would apply to the congressional map only - since the other two maps were the redrawn ones approved by the General Assembly.

Attorneys for the North Carolina General Assembly filed an Emergency Application for Stay of the rulings Friday.

"The United States Constitution is clear - state legislatures, not state judges, are responsible for setting the rules governing elections," NC House Speaker Tim Moore, R-Cleveland, said, By striking the General Assembly's congressional map and redrawing their own, with the help of Democrat partisans, the courts have, once again, violated the separation of powers. This effort to circumvent the elected representatives of the people will not stand."

If the Supreme Court takes the case and rules in favor of a stay. it would create a political scramble as candidate filings have already started with the new districts.

"This coordinated effort is funded by Eric Holder and led by disgraced Democrat operative Marc Elias, who have no business in interfering in our elections," Moore said. "I will pursue all legal means to ensure that North Carolina's elections are decided by North Carolinians and that the constitution and rule of law are followed."

Allison Riggs, a lawyer representing Common Cause in the litigation, said GOP legislators were now "outrageously" attempting to insert the U.S. Supreme Court into state laws less than three years after the justices ruled state courts could use their own laws to curb partisan gerrymandering.

"We are confident this specious attempt to undermine our judiciary will be rejected," Riggs said in a news release. The U.S. Supreme Court told Common Cause and other litigants to respond to the stay request by Wednesday.

If the map is allowed to stand, a likely additional Democratic seat will make it a little tougher for national Republicans to take control of the U.S. House in the fall.

The state judicial panel and state Supreme Court upheld replacement state House and Senate districts, which are not part of Friday's appeal.