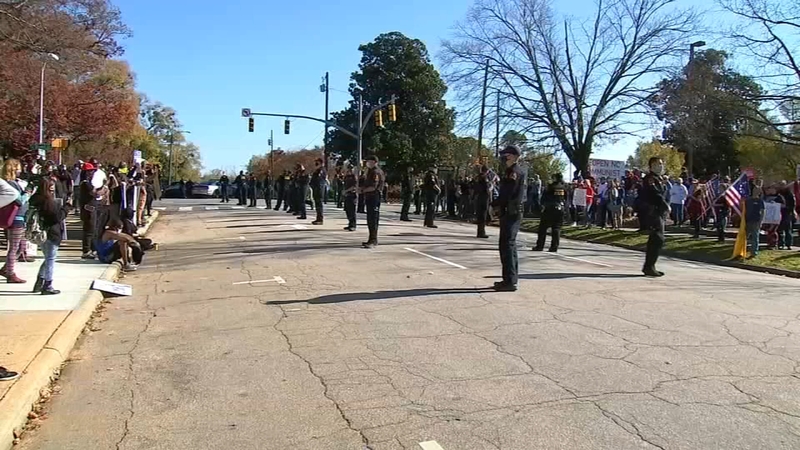 Police shut down several streets around the Governor's Mansion during the multiple demonstrations. ReOpen NC and some Trump supporters were on one side of Jones Street. Biden supporters and supporters of the Black Lives Matter movement were on the opposite side.

ReOpen's NC's had planned a peaceful protest Saturday morning but it was quickly disrupted by the counter-protestors, who see the group and its allies as far-right fascists.

But organizers said ReOpen is a bipartisan group that's furious with Governor Roy Cooper's handling of the pandemic.

New guidance requires masks to be worn at all times inside public places, and during holiday celebrations, if visiting someone outside your home-keeping the guest lists under 10 people.

"I am here today to tell Roy Cooper that he does not control me," said Ashley Smith, one of the leaders of ReOpen NC. "I am a free American citizen and that I will have as many people in my household as I please. And he cannot enforce any of his nonsensible dictates in my life. We're here in love. We're here in peace. We are here to love one another, shake hands, to hug and celebrate the founding of our country. Which to me is what Thanksgiving has always been about.

She believes these maskless protestors are white supremacists masking their cause under "patriotism."

"I am here as a descendant of enslaving, landowning Southern white people," said Humphreys. "To represent the humanity of Black and brown people to these people who dare to stand in our streets. This is about an anxiety, about definition, and identity and who's who and who's important."

Michelle Marrow from Cary doesn't believe her protest today of the governor is racial. But rather about the legality of his executive orders and the financial impact it's had on her husband's job in real estate.

"It's time for us to be examining what he's been doing and we need to get him out of the Governor's mansion because he is not doing his job. He's overreaching his boundaries," said Morrow. "It's time for the people to stand up and say no more."

"It seems as though every month or so for the last eight months the Governor says, 'We're almost there' urging compliance and 'a light at the end of the tunnel is near,'" said Smith. "Truth-be-told, Cooper and DHHS Director Dr. Cohen have still not emphasized the co-morbidity rates of infections and deaths that would prove that only a small fraction of the general public is actually at risk."

"Those with certain chronic conditions are more at risk of progressing to severe, life-threatening COVID-19 once infected is common knowledge. Unfortunately, those chronic conditions are very common. According to a recent report from the Robert Wood Johnson Foundation, a third of adults in NC are obese and two-thirds are either obese or overweight. In addition, over 30% of North Carolinians have been told they have high blood pressure and one in 10 have been diagnosed with type 2 diabetes. Add on prior and current smoking, compromised immune systems, and older age and the proportion at substantial risk of becoming hospitalized or dying due to COVID-19 becomes quite large."