'It's what we've been waiting for': Optimism fills Raleigh bars, eateries on first night of eased restrictions 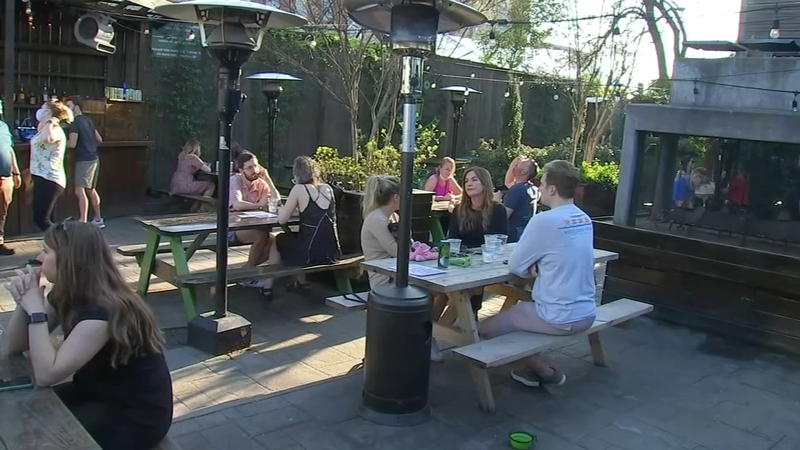 RALEIGH, N.C. (WTVD) -- Beautiful spring weather brought people to the Glenwood South section of Raleigh. It was comfortable to sit outside for a meal or cocktail and starting Friday night, businesses had the option of serving additional people.

"We are totally stoked. This is an indication that the governor feels we're all moving in the right direction," said Carolina Ale House-Downtown General Manager Rob Vitellaro.

Retail stores, museums and salons can now operate at 100% capacity.

Arenas, stadiums and bars are limited to 50%.

This is as busy as I’ve seen glenwood south in some time #abc11 pic.twitter.com/uTHGQVzr9W

On Friday night at Raleigh Beer Garden, the mood was one of optimism and excitement.

"It's what we've been waiting for. It's really great we're just hoping everyone bears with us with the transition," Raleigh Beer Garden general manager Gillian Shepherd said.

Shepherd said they're doing business at 75% of capacity inside and 100% outside. She said they're excited to get to serve until 2 a.m.

"It's a really big place. It will be a little less because we have tables spread six feet apart and there's no standing room," she said. "We're trying to play it safe in the beginning rather than sorry."

It’s been a while for places like @RALBeerGarden and other bars where they could be open until actual last call at 2am. Tonight is that night as eased restrictions from @NC_Governor go into effect #abc11 #COVID19 pic.twitter.com/6yBeC1NGfY

She said they have additional space set up outside behind the Beer Garden.

"We have to train our staff on how to retrain the public to be in public drinking again," Shepherd said. "It's harder than most people would think."

Businesses are mixed on whether to expand capacity despite the governor's new executive order.

Some spots are holding off on the changes, however.

"We still have to adhere to the CDC guidelines of six-feet social distancing," Vitellaro said.

Staffers are just starting to get back into the groove at the downtown Raleigh location. It only reopened last Wednesday after being closed a full year.

"It took us a couple weeks to get things back up and running," said Vita Vite Owner Lindsay Rice.

She doesn't want to cram more people inside the wine bar.

"My biggest priority is having our customers and staff feel safe right now, so until we get a little further along in this process, we're going to keep things how they are right now," Rice said.

Ken Yowell, the owner of Oak City Meatball, re-opened the business at the beginning of this year and said he will remain take-out only for now.

Ken Yowell’s @OakCityMeatball is open again in downtown @RaleighGov for take out. He said it’s been a huge task hiring staff but he hopes to be open for in person dining by the end of April.
“I’m glad to see downtown Raleigh starting to wake up” #abc11 pic.twitter.com/UAoUTWsK5m

"There's no grace period for you. There's no we get an opportunity to kind of find our footing," Yowell said. "People expect to walk back in and order and expect it to be exactly the way it was. People expect our mac and cheese to be great and to be exactly how they remembered it."

Yowell said Oak City Meatball will continue to follow distancing and other protocols.

"Things have changed for restaurants and bars probably going forward just period," he said, but he added, "I'm glad to see downtown Raleigh starting to waken back up and get a little livelier - there's good news on the horizon."

At Adara Spa in Raleigh, they're also playing it safe.

Spa owner Sunny Miller said the business could open at 100% capacity but is choosing not to. Miller said they want to keep clients safe so at most, she'll have 15 people in the facility at once.

"Safety is still the No. 1 concern, so if these two ladies weren't sitting together, they wouldn't be sitting side by side," Miller said. ""Everyone needs to be safe, COVID is still a real thing."

Miller said she has been vaccinated but noted that there are people who haven't and "I don't want people to feel any less safe because we're at 100% capacity."