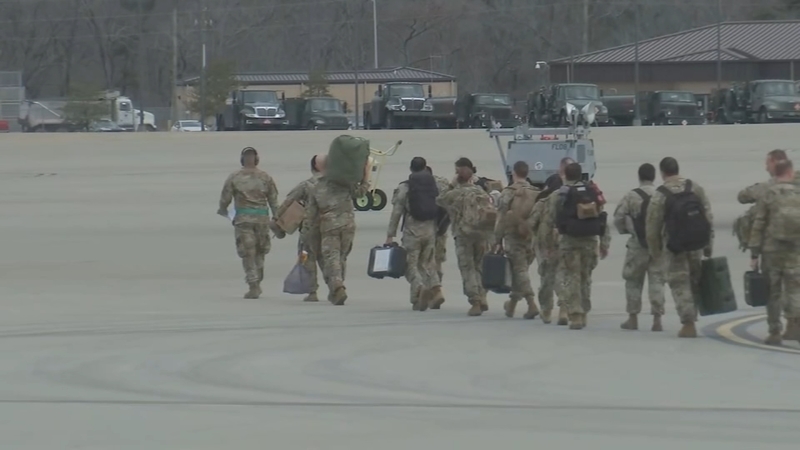 Saturday, President Biden spoke with Russian President Vladimir Putin for more than an hour. During the call, Biden made it clear to Putin that if Russia does invade Ukraine, the US and allies will respond. Although, what that response will entail was not specified.

"The U.S. is quite nervous based on some of the intercepts that they're getting," said retired Col. Steven Ganyard.

Several countries, including the US, Canada, United Kingdom, and Japan, are urging their citizens to leave Ukraine immediately

"We can't pinpoint the day, at this point, and we can't pinpoint the hour, but what we can say is that there is a credible prospect that a Russian military action would take place even before the end of the Olympics," national security advisor Jake Sullivan added.

At Fort Bragg, 1700 soldiers have already been sent to Europe and three thousand more are set to deploy Monday.

"The White House and intelligence services are seeing all the pieces of the puzzle, everything that Russia would need to invade Ukraine, is coming together. You have 30 war ships exercising in the Black Sea, to the South of Ukraine, this large exercise in Belarus to the North of Ukraine," said Ganyard.

Veteran Mike Baker, who deployed four times to the Middle East, discussed what soldiers and their families here could be experiencing.

"It's definitely tough when you leave your family behind. My last combat deployment, I left my wife, I left my oldest son whose now in college. It weighs on your mind of what's going on back home. How are they doing," said Baker.

Baker, who has been following the developments in Europe, pointed to Russia's annexation of Crimea in 2014, calling it a line in the sand.

"We definitely have to support our world partners, that's first and foremost. But it is concerning. We just left a 20-year war," added Baker

Russia continues to deny that it has plans to invade Ukraine alleging the US is causing hysteria.