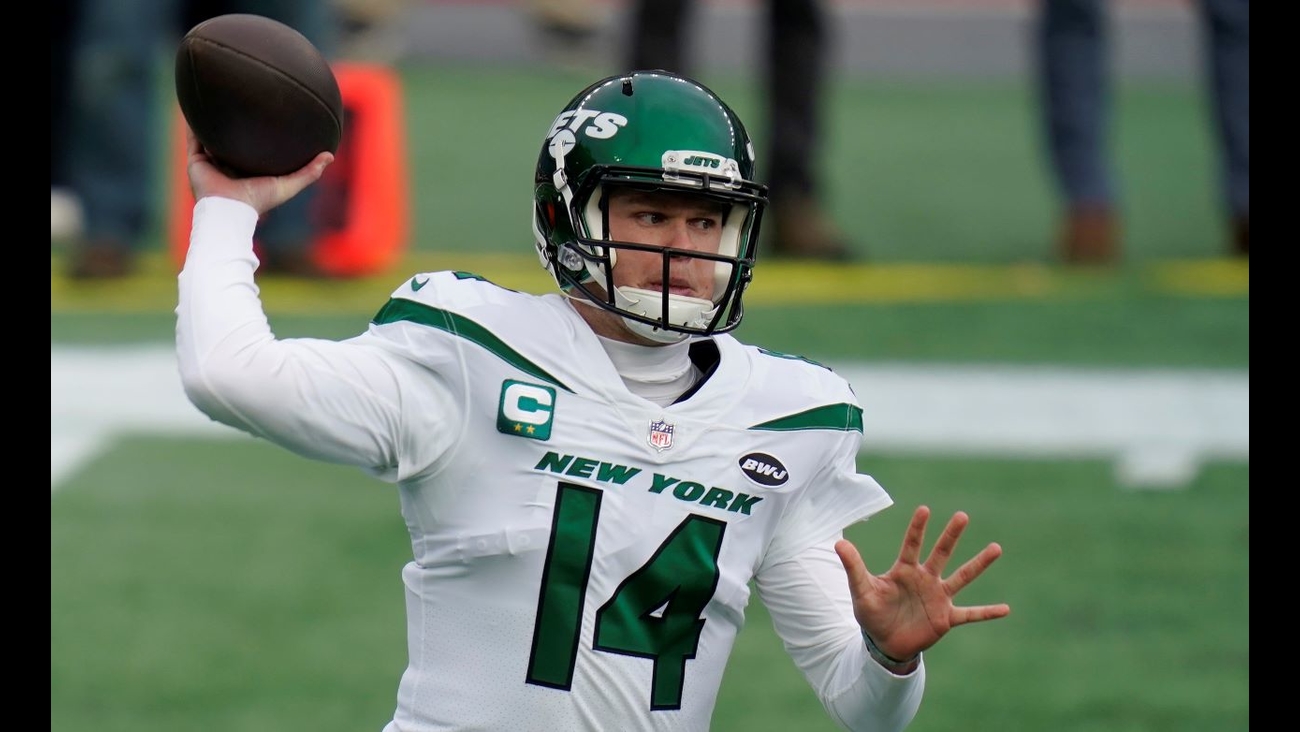 Sam Darnold is coming to Carolina in a blockbuster trade. (Charles Krupa)

CHARLOTTE, N.C. (WTVD) -- The Carolina Panthers addressed their quarterback situation with a blockbuster with the New York Jets that will bring quarterback Sam Darnold to Charlotte in exchange for three draft picks.

Teddy Bridgewater was the starter for Carolina last year, but the Panthers made it clear they felt a need to upgrade the quarterback position.

Darnold has one year remaining on his rookie contract, with guaranteed salary and bonuses totaling $4.6 million. The Panthers must decide on Darnold's fifth-year option for 2022 by May 3; the pre-determined amount is $18.8 million, fully guaranteed. He was due to count $9.8 million on the Jets' cap, but they will get $4.8 million in relief and a $5 million "dead" charge for 2021.

Darnold, 23, failed to reach huge expectations in New York. He showed promise at the end of his rookie season, but he regressed under former coach Adam Gase, who was hired in 2019 -- in large part -- to develop the former USC star.

He will get a much-needed change of scenery and a new opportunity in Carolina, where he'll also be reunited with wide receiver Robby Anderson. The quarterback could also quickly seek some measure of revenge this season when the Panthers host the Jets.

"I want to publicly acknowledge the commitment, dedication, and professionalism Sam displayed while with the Jets. He is a tough-minded, talented football player whose NFL story has not been written yet," Jet s general manager Joe Douglas said in a statement. "While all these things are true, this move is in the short- and long-term best interests for both this team and him.

"We thank Sam for all of his work on behalf of this organization and wish him well as he continues his career."

For Carolina, the trade further clouds the future of Bridgewater, who was 4-11 last season as a starter and struggled to win close games down the stretch.

Bridgewater completed 69.1% of his passes, throwing for 15 touchdown passes and 11 interceptions. The team's primary backups last season were P.J. Walker and Will Grier.

After the season, Panthers coach Matt Rhule said of Bridgewater: "He's our quarterback."

But the Panthers attempted to trade for Detroit's Matthew Stafford, who wound up with the Los Angeles Rams and also were interested in Houston Texans quarterback DeShaun Watson.

Bridgewater has two years remaining on a three-year, $63 million contract that he signed in 2020, a deal that included a $15 million signing bonus.

The Panthers have the eighth overall pick in the draft and it was widely suspected they could use the selection on a quarterback. But with Darnold in the fold, the Panthers are likely to target other areas of need including offensive tackle, linebacker, tight end or cornerback.

As for the Jets, without a proven quarterback on the roster, they are expected to select Darnold's replacement with the No. 2 overall pick in the April 29 draft in Cleveland (on ESPN and the ESPN app). The leading candidate is BYU's Zach Wilson, who has met virtually multiple times with the Jets' brass.

READ MORE: Did the Panthers make a mistake letting so many players end up in Buffalo?

The organization was conflicted by the decision to part with Darnold, sources said. Jets coach Robert Saleh spoke highly of him, saying he has "unbelievable arm talent." General manager Joe Douglas also praised him but declined to commit to Darnold last month and indicated he was open to fielding trade inquiries.

In three seasons, Darnold went 13-25 as a starter, with 45 touchdown passes and 39 interceptions. He completed 59.8% of his passes and never finished above 26th in passer rating.

Darnold has battled injury and illness throughout his pro career. He missed three games as a rookie (sprained foot), three games in 2019 (mononucleosis) and four games in 2020 (sprained throwing shoulder).

To be fair, he didn't have much stability with the Jets, as he played under two head coaches and two different offensive systems. He also had no 1,000-yard rushers or 1,000-yard wide receivers, and he played behind an ever-changing offensive line.

The Jets landed Darnold after a blockbuster trade one month before the 2018 draft. Determined to pick a quarterback, they moved up three spots to No. 3, sending three second-round picks to the Indianapolis Colts.

They didn't think Darnold would be available at No. 3, but the Cleveland Browns pulled a surprise by taking Baker Mayfield No. 1 overall. Running back Saquon Barkley went to the New York Giants, leaving Darnold for the Jets, who had rated him the draft's No. 1 quarterback.

"I honestly think (people) are going to look back 20 years from now and say this is the moment the Jets shifted into a new gear, that they became a great team," Jets vice chairman Christopher Johnson said a few days after the draft.

Darnold started opening day as a rookie, infamously throwing a pick-six on his first pass. He settled down and beat the Detroit Lions in a blowout, exciting the Jets' quarterback-starved fan base. He had an up-and-down season (17 touchdowns, 15 interceptions), but there were enough positives to make the organization believe it had found a long-term answer.