NC's best speller might be even better on the tennis court 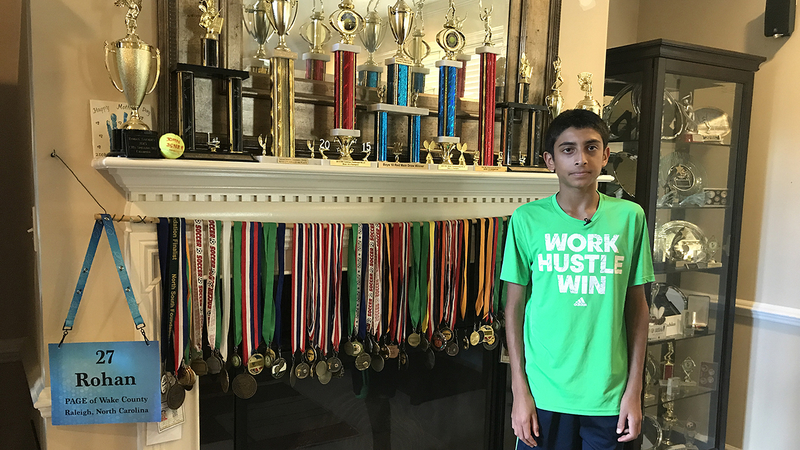 CARY, North Carolina (WTVD) -- Rohan Sachdev just wrapped up a 12th-place finish at the Scripps National Spelling Bee. So how does he follow that up?

By dazzling in something completely different - tennis.

The Wake County teen has juggled both passions for quite some time. While he started tennis at age 3, his spelling prowess came a bit later in first grade. Both have proved to be pretty lucrative.

"It just goes to show that hard work can take you places and do wonders for you. It's all his hard work," said Rajan Sachdev, Rohan's father.

Rohan is no Scripps Spelling Bee rookie, though. He first made the trip to the main stage in sixth grade and this time around faced the bright lights in DC with a more seasoned approach.

"This was my last year, so I studied a lot harder since I mean this was my only shot at winning it," Rohan said. "In sixth grade, I still had three chances left, so I put in everything I could this year."

"We are so proud of him. Rajan Sachdev said. "He's worked hard, so just getting there was a victory in itself. All the 298 kids who got there are all champions.

"It was a real proud moment for us and the three of us sitting there, as well as the grandparents back home watching," Sachdev added. "They actually got to watch it live back home in India."

Rohan said it was exciting, but at the same time, he was "kind of anxious."

"I tried to control that because I just tried to focus on my words," Rohan said.

If spelling is his pipe dream, tennis is Rohan's calling card. And during his very limited free time, he said you'll find him on the court.

How does he manage his day?

"It's pretty tough because I come back from school around 3 o' clock, then I'll play tennis for two hours and then do some fitness," Rohan said. "Then I'll usually do some spellings. I used to study for like an hour and then my mom quizzed me for like two hours, then I would do studying on my own, and then I would do some of my school work, so I had a pretty packed day."

Both pursuits have taught him the importance of time management.