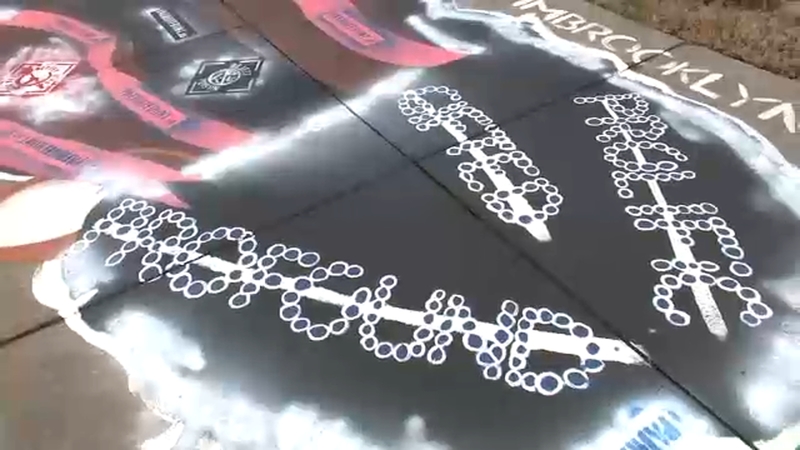 RALEIGH, N.C. (WTVD) -- A mural near Shaw University has been vandalized by racist graffiti featuring the name of an alleged White supremacist organization for the second time in five months.

The artwork, titled "I Am Her and He is Me" was created by Muslimah Shareef in October 2020.

"It wasn't about race, it was just about people who were no longer here but should still be here, and shouldn't have died in the way they did," said Shareef, who painted on the sidewalk following nationwide Black Lives Matter rallies. The mural features the face of a black woman, with inspirational words and the names of victims of police brutality.

Located along East South Street, near the corner of South Wilmington, it's right in front of Shaw's campus near Etsey Hall. Shareef chose the location in front of the school, an HBCU, intentionally, hoping students would appreciate it.

It was created in conjunction with Raleigh ArtBeats, a temporary public art project led by the City of Raleigh, Raleigh Department of Transportation, and Raleigh Arts.

In October 2021, the mural was first vandalized, and quickly covered up. As Shareef was working with university officials to come up with a plan to formally repair it, it was vandalized again.

"I still can't understand how someone can leave their house, with the intent of being so hateful," said Shareef.

She said she's more concerned about students who walk by it every day.

"If I was that age and I woke up that day and went to McDonald's (located across the street) and saw that on the ground, I'd be scared. I'd have so many questions," said Shareef.

"I can't believe in today's society we still have these things happening, mainly because that is not affecting anyone. It's not impacting anyone's life. So, it's kind of sad," said senior Thalita Faria.

Junior Reid Cobb-Phillips added: "I'm just grateful that she's concerned about us, but I feel like it's not going to change anytime soon especially we don't know who actually did it,"

Raleigh Arts and Raleigh Department of Transportation are aware of the vandalism and are working to cover it up. Despite the incidents, Shareef is not deterred, planning to fix it.