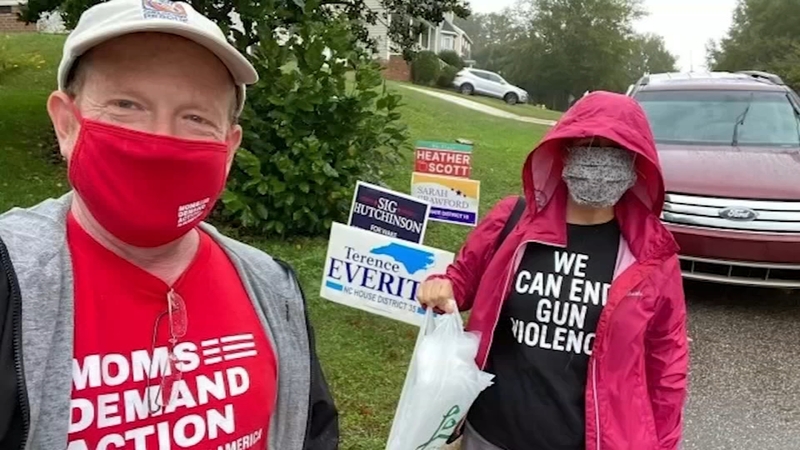 RALEIGH, N.C. (WTVD) -- If you find yourself in downtown Raleigh this weekend, chances are you've walked past a building or two that is lit orange.

The color honors the lives taken from gun violence as Governor Cooper proclaimed June 4th as Gun Violence Awareness Day. It's something Apex resident and gun violence survivor Tony Cope says is necessary as he lives with triggers from a harrowing encounter.

"It shakes you when you go into stores. Loud noises," said Cope. "It's hard to grasp the sheer panic of protecting your six-year-old and keeping her away from a gunman."

In 2010, a gunman entered the Apex Target store 11 years ago while he and his family shopped. His wife and older daughter escaped out the back of the store.

Chaos unfolded as the gunman shot and killed a cashier before turning the gun on himself.

His daughter, Logan and another girl hiding under a rack of clothes waiting for the SWAT team to escort them out of the store

"That leaves scars, just that trauma as fear. Your job as a parent is to always keep your child safe," said Cope.

After surviving this harrowing encounter, he vowed to help others. He joined Moms Demand Action North Carolina, a grassroots gun prevention organization. While he is a survivor, there are many others who don't.

According to the Governor's Office, on average, 1,300 people in North Carolina lose their lives to gun violence each year.

Cope calls this proclamation a victory for the Tar Heel State but knows there is more work to do.

"We have to work together. We have to think things through. We have to be bipartisan as best as we can," said Cope.
Report a correction or typo
Related topics:
societyraleighgun violenceroy coopernorth carolina news
Copyright © 2021 WTVD-TV. All Rights Reserved.
GUN VIOLENCE
Popular zydeco musician shot in the back while at Louisiana concert
2 killed in double shooting on I-85 entrance ramp ID'd
Americans' optimism about US direction drops since May: POLL
Lumberton family blessed to be alive after being shot 10 times
TOP STORIES
After four miscarriages, Raleigh woman gives birth to miracle son
Legally in the US since age 6, Wake Co. woman may soon have to leave
Helping Hand Mission drum major killed in shooting in Raleigh
Durham works to help those facing eviction as moratorium ends
LATEST: Vaccinated Lindsey Graham says he has COVID-19
Durham Paralympian tests positive for banned substance
Show More
DPAC reopens for first show since March 2020 with masks required
Deadly breakthrough COVID cases rare for fully vaccinated: CDC data
NC companies grapple with COVID vaccine mandates amid surging cases
Wake County Meals on Wheels restarts hot meal home delivery
NC organization supports requiring vaccinations for nursing home staff
More TOP STORIES News