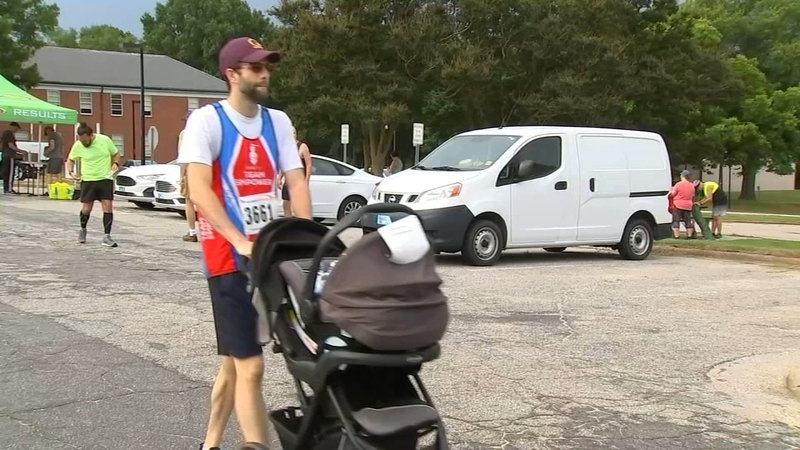 RALEIGH, N.C. (WTVD) -- This rainy weather caused some Triangle families to change their Father's Day plans. But many still got out to celebrate.

"We have about 125 or 130 folks coming out to Dix Park today to run a 5k to raise money for the National Multiple Sclerosis Society and the fight against MS," said Bruce Bokish, Precision Race Partner.

Dads at UNC Medical Center's NICU got a copy of the book "Daddy Hug" by Tim Warnes, just in time for Father's Day.

The foundation Jameson's Joy donated 60 copies of the book to fathers of babies there and will send 5,000 copies to dads at UNC Rex's NICU over the next year. The foundation is named after Dan Courtine's late son, 9-year-old son, Jameson.

"We, as part of the mission of Jameson's Joy, want to help connect fathers with their kids," Courtine said. "We-Erica and I-are both teachers so we've seen firsthand for years, the effect that having a father in the house, can have a positive impact on a kid or a negative impact if they don't have a father in their house. And so that just became a mission with Jameson's Joy, very quickly, that we wanted to help fathers in any way we can."

Dads waited outside Dame's Chicken and Waffles in Durham for Father's Day brunch with their children.

"The weather sort of sucks today but it's just like life," Durham father Kioni West said. "It's not always going to be sunshine."

"Father's Day is awesome," West said. "You get to spend time with your kids. You get your ties, socks and stuff like that."

"Me not having my father around showed me that, 'Hey, how does it feel to be a father?,'" Miller said. "What can I offer my boys that I didn't never have growing up? It saddens me a lot when I didn't have my father growing up but knowing now that I can give my kids what I never had means I'm going to go above and beyond to give them everything that they should have, that I should have had."