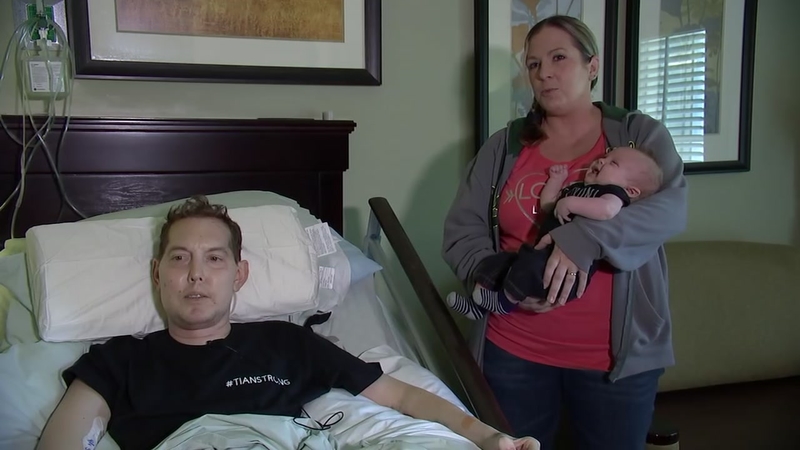 Bragg soldier in hospice care gets hundreds of greeting cards

WEST END, N.C. (WTVD) -- ABC11 is highlighting good deeds and an outpouring of support for a Moore County soldier who stricken with cancer. What started out as a simple request for words of encouragement turned into hundreds of well-wishes from all across the country.

When you open a greeting card, your first instinct might be to check for cash. But Maj. Christian Blevins has something even more valuable inside these memos.

The Army soldier has deployed several times to Iraq and Afghanistan but now he's facing a new battle. One that first started as a small skin mole.

"We did some test on it and realized that after a biopsy that I had melanoma, which is not normal for someone my age," Blevins said.

After several rounds of chemo, radiation and therapy, doctors told his then-pregnant wife, Katrina, there was nothing else they could do.

"That was the day that he was ready to give up. I mean, he was done he told me that he was sick of being sick," Katrina Blevins said.

But Katrina wasn't going to let the combat soldier and father of six retreat that easily.

"He was just real down and ready to give up, and I just said this can't happen, and I said you're not going to give up on me and so I posted on Facebook asking for people to send us cards for encouragement and to pray," Katrina Blevins said.

The post was shared thousands of times on Facebook and that turned into stacks of greeting cards.

"There are hundreds of cards in there from all over the United States as well as the world, I mean, we've gotten things from Australia," said Maj. Blevins.

He even got some love from a world champion.

"He got a video of Lance Armstrong, a picture from Ted Cruz," Katrina Blevins said.

From videos to visitors, people showed their support. Strangers showed up at First Health in Moore County to visit.

"It's about our fellow veterans. I just happen to feel very strongly about supporting our veterans because they deserve it," said Mark Palmer, a veteran who came to visit.

These days Maj. Blevins is in great spirits, thanks to the encouragement.

"My faith. It gets stronger and it's getting stronger all the time especially seeing everything that comes from everybody," Blevins said.

So while the battle this time might be different, the strategy is still the same.

Blevins is still accepting greeting cards at 6271 Seven Lakes West, West End NC, 27376. A GoFundMe page has also been set up for the family.