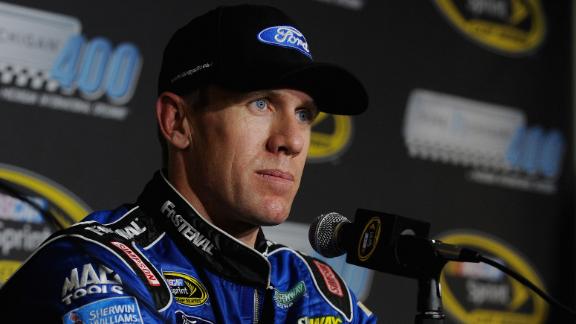 The most recent best worst-kept secret in NASCAR was finally confirmed Tuesday as Carl Edwards strode across a stage after being introduced as the newest driver for Joe Gibbs Racing in 2015.

And so it was official, as the 11-year Sprint Cup veteran and former Nationwide Series champion joined JGR as the key piece of the team's self-proclaimed "unprecedented announcement" that included an expansion of its diversity initiative and push into Mexico and Latin America.

Edwards' No. 19 Toyota will be a new fourth program for a team that already has Kyle Busch, Denny Hamlin and former series champion and Roush Fenway Racing teammate Matt Kenseth.

"For 10 years, I've worked as hard as I can ... everyone has worked as hard as they can to go win championships," said Edwards, who was the series runner-up to Tony Stewart in 2011. "And that is my goal. I felt like, at this time in my life and career, a change might be something that would let me reach that goal."

That certainly worked for Kenseth, who left Roush after 13 Cup seasons to produce a career-high seven wins with Gibbs in 2013.

Edwards is eighth in Sprint Cup points this season and has won races at Bristol and Sonoma.

"The focus is still to go win the championship in the 99 Ford for Jack Roush," Edwards said.

JGR has struggled to recapture the magic from its 12-win season in 2013, but adding Edwards, who has won 23 career Sprint Cup races, will make its lineup a statistical powerhouse in 2015:

All three of JGR's current drivers are qualified for the Chase for the Sprint Cup. Kenseth is winless, however.

Edwards had been viewed as the most attractive free agent entering this season, and RFR confirmed his departure in July when it announced that veteran Greg Biffle, Ricky Stenhouse Jr. and Trevor Bayne would compose its 2015 lineup.

ARRIS Group Inc., a broadband and video delivery technology company, will sponsor Edwards for 17 Cup races. It also will be the full-time sponsor for new JGR driver Daniel Suarez in the Nationwide Series and part time in the truck series beginning in 2015.

"To be able to bring a driver the caliber of Carl Edwards on board to launch our fourth team is just a thrill," Gibbs said. "But we also have the opportunity to announce a new partner in ARRIS that will not only sponsor Carl but also share a vision with Carlos Slim Domit and Escuderia Telmex to develop Mexican and Latin American drivers in NASCAR. We are excited to have Daniel Suarez as part of that program and look forward to watching his development in the NASCAR Nationwide Series next season."

JGR also announced that it has partnered with Slim Domit, CEO of Grupo Carso and co-founder of Escuderia Telmex, to aid in its diversity program "with the continued focus of developing Mexican and Latin American drivers in NASCAR."