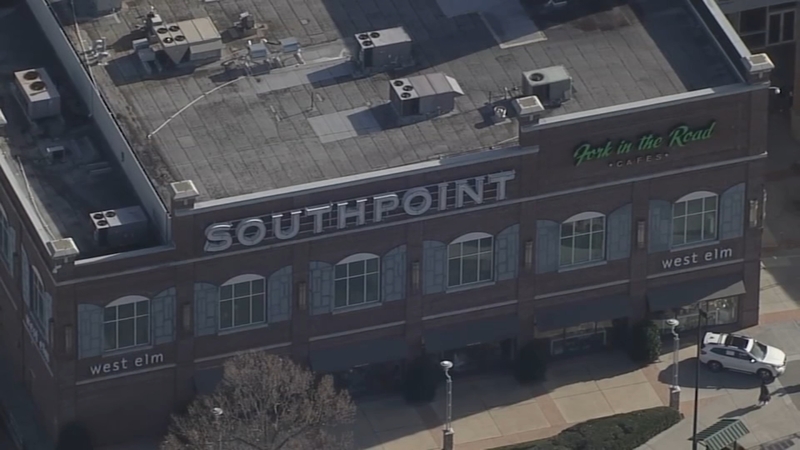 Another incident mars Streets at Southpoint

DURHAM, N.C. (WTVD) -- Durham Police are investigating a robbery at the Streets at Southpoint on Wednesday.

Police said the incident happened shortly after 6 p.m. Wednesday when a "group of several juveniles" approached three people in the food court and a fight ensued.

A wallet and a handgun were stolen from one person involved in the confrontation. A man who was one of the three people confronted was assaulted before the juveniles fled the mall in different vehicles, described only as a black sedan, a grey sedan, and a grey SUV.

No shots were fired, police said.

The man was transported to a hospital with what police described as non-life-threatening injuries.

No charges have yet been filed. The incident remains under investigation.

Anyone with information is asked to call Investigator N. Byrd at (919) 560-4440, ext. 29136 or CrimeStoppers at (919) 683-1200. CrimeStoppers pays cash rewards for information leading to arrests in felony cases and callers never have to identify themselves.

It's the most recent troubling incident at the popular shopping complex. On Black Friday, three people were shot during an attempted robbery, including one of the suspects. A child was among those injured by the gunfire.

Posha Morgan, the manager of Brighton Collectibles, said she wasn't at the mall Wednesday but she was there for Black Friday.

She said the mall handled the Black Friday incident well. Morgan said she has seen many Durham police officers and security officers patrolling the mall since.

This store manager wasn’t here Wednesday but was in the mall for #BlackFriday shooting. Posha said the mall has handled all of it well and she’s seen extra @TheDurhamPolice officers inside since. She wants folks to feel safe coming out for #XmasShopping #abc11 pic.twitter.com/kLLLW83Dzz

Though she said she doesn't feel unsafe at work, she said business is down.

"We do worry about customers in general," Morgan said. "I have seen a decline in business and traffic for the mall. We do want people to feel safe because it is the Christmas season, it's what you do with your family but we're just trying to accommodate any way we can."

In October, there was chaos when a fight broke out and people mistook a broom falling for a gunshot.

A few extra security guards were visible Thursday around the food court area as the mall tries to ease shoppers' fears during a critical sales time for retailers.

One business owner witnessed Wednesday's incident and spoke to ABC11 about it.

Just listen to small business owner Christian and what he did last night when another fight broke out at Southpoint Mall. He says he hid behind his freezer. He was also here when shots rang out for Black Friday #abc11 @TheDurhamPolice pic.twitter.com/r994HfJxwF

"I was taking care of customers, and I heard people running from that side of the food court, and people screaming 'here we go again, here we go again,' and that's when people started getting on the floor and I laid behind my freezers," said Christian Rocuts of Raleigh Popsicle Company.

New Durham Police Chief Patrice Andrews is coming in at a time when crime is up and staffing is down.

Andrews met recently with patrol officers who said they were "worn out." In 2021, 36 officers have resigned.

To combat some of the staffing issues, @TheDurhamPolice Chief @ChiefAndrewsDPD will be picking up a few shifts in early 2022.
She started as a beat cop in Durham. Other top brass will be doing the same to give officers a break #abc11 pic.twitter.com/T8LJGw17x3

In a temporary solution, a number of DPD's top brass will be picking up shifts; even the chief herself will be doing some patrol shifts.

"I issued them a challenge," Andrews said. "I said let's come up with a plan in which we could help relieve some of the pressure they were feeling on the street."

ABC11 reached out to Streets at Southpoint but has not received a response.