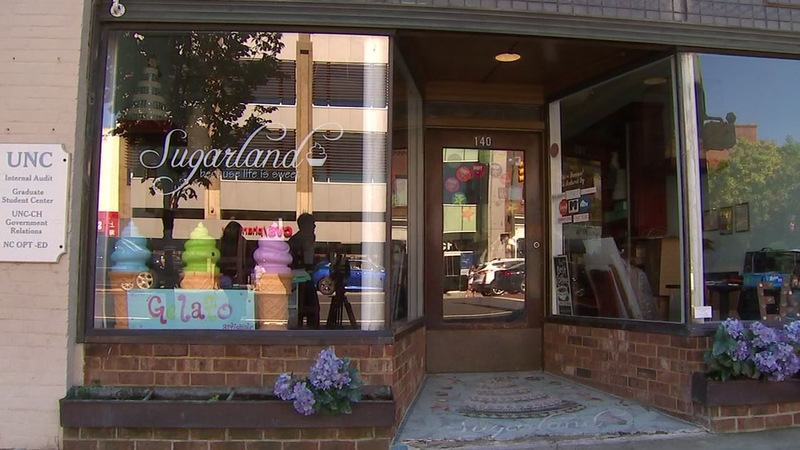 CHAPEL HILL, N.C. (WTVD) -- On its website, Sugarland claims to be North Carolina's most famous bakery, but now brides and grooms are saying it's a bakery that is leaving them scrambling for a cake right before their big day.

Sugarland was a popular bakery that had a location in Raleigh's Cameron Village and in Chapel Hill along Franklin Street. Both locations are closed, and customers say they got no notice.

Kali Pike and her fiance John Feasel paid Sugarland a $225 cake deposit in March for their October wedding. Kali says she thought all was fine until one day they stopped by the Sugarland bakery and it was closed.

"I called, I emailed, no response Looked on their Facebook page, and I saw that other couples were having the same issues that we were," Pike said.

Same problem for Ben Davis and his fiance after they paid Sugarland a cake deposit for their wedding, which is this weekend.

"The reason why we went with the bakery they had a fantastic lemon cake," Davis said.

He said he never heard from the bakery's owner, Katrina Ryan, about any problems and only learned the bakery was closed when they went to get some cupcakes.

Both couples said that with no answers from Ryan; they were forced to find other bakeries to make their wedding cakes. Both couples also said they want their deposits back from Ryan since Sugarland never fulfilled the orders.

I got in touch with Ryan, and she said they were forced to close their business after family medical issues this summer as well as several equipment issues with the business.

She also said both Hurricane Florence and Tropical Storm Michael caused flooding in her business along Franklin Street and they just couldn't recover.

"Since we are dissolving the company, there are specific procedures we need to follow in noting any creditor of the dissolution of the company," Ryan said.

She showed us a claim form for customers who gave deposits. (Were you affected? You can fill it out here). She added, "Refunds will be made as part of the dissolution process. State guidelines say that a dissolution can take 60 to 120 days, but we expect everything to be resolved in 30-45 days."
Report a correction or typo
Related topics:
businesschapel hilltroubleshootergoing out of businessstore closingcake
Copyright © 2022 WTVD-TV. All Rights Reserved.
TROUBLESHOOTER
Apex dog owner warns others after pharmacy's medication mishap
New Wi-Fi device this holiday? Protect yourself from hackers
Wake County tenants, landlords waiting months for assistance
Are extended warranties worth it on back-to-school laptops?
TOP STORIES
Icy roads a morning threat as temperatures dip into the 20s overnight
Monthly tax credits end, leaving some NC families forced to make cuts
Omicron surge hasn't peaked nationwide: US surgeon general
Triangle Restaurant Week returns to highlight local small businesses
Deputies investigate shooting at Harnett County home
Jewish community strives to 'stay strong' after Texas synagogue terror
LATEST: Long lines for COVID testing -- is it worth the wait? Maybe
Show More
Dozens of RDU flights canceled through Monday evening
Free virtual class on Martin Luther King, Jr. may surprise you
Already delayed, North Carolina primary could be moved to June
Woman killed after being pushed in front of NYC subway train
Man arrested, charged with Christmas Day murder in Edgecombe County
More TOP STORIES News