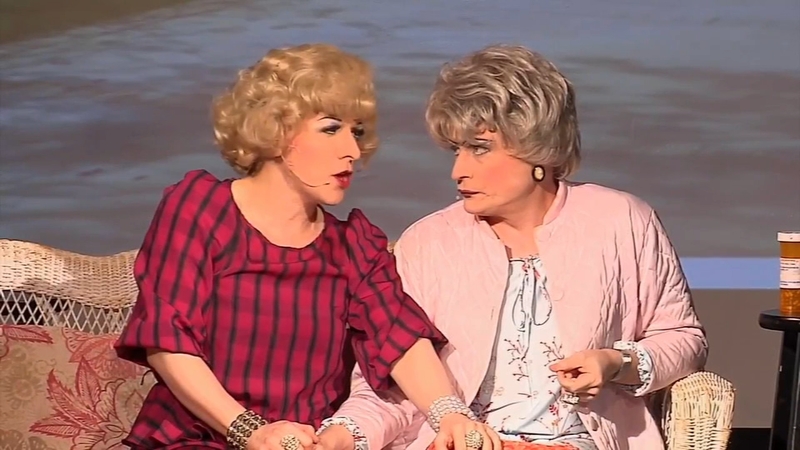 NEW YORK CITY -- While New York City theaters remain shut down, a couple of performers have moved online to try and entertain their fans while the pandemic continues.

Peter and John Mac perform in drag as the Golden Girls in a loving tribute to the TV sitcom that ran for seven seasons ending in 1992.

The award-winning sitcom may have gone off the air 28 years ago, but these two fans never forgot them.

"We take some of the old ideas and we build new shows around them," said Peter Mac, who channels the late Estelle Getty as Sophia Petrillo.

"Usually this hallway is lined with people getting ready to see 'The Golden Girls Live,'" Peter said of The Producers Club Theaters on West 44th Street.

The announcement that Broadway shows would remain shut down until next year amid the coronavirus pandemic was bad news for all who make their living in the theater, but it also put

The pair has appeared as the Golden Girls almost 2,000 times, but the Off-Broadway theater where they perform is closed along with all the other venues.

"No two shows are the same, and we need the audiences interaction to be successful," John said. "And I said, 'There's no way we can make this work online.' And Peter said, 'Yes we can.'"

There are challenges, of course, the least of which is the lack of an audience.

"It breaks my heart," Peter said. "It absolutely breaks my heart, because you feed off of them. It's a marriage between an audience and a performer."
But as the old adage goes, the show must go on.

"We've got to keep live theater going with this virtual theater," Peter said. "Until we're allowed to have people in these seats again."

Peter does another show as Judy Garland, and both are available online at a moderate cost: