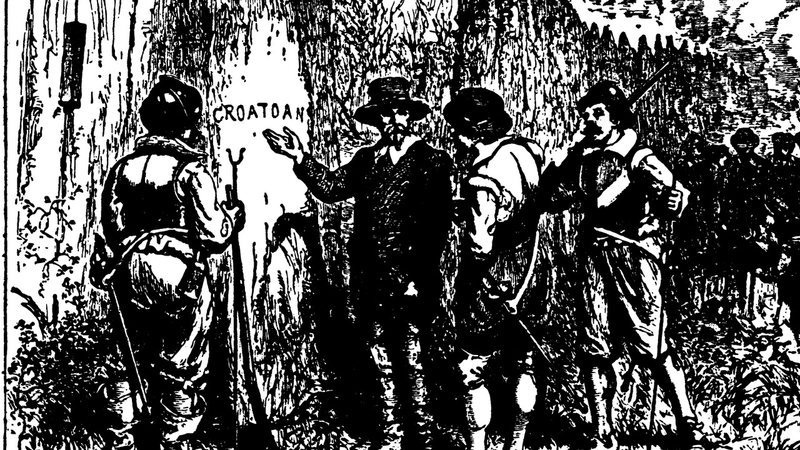 New clues hint at what happened to the Lost Colony

MANTEO, N.C. (WTVD) -- Discoveries unearthed along the North Carolina coast provide new evidence to what likely happened to the Lost Colony, according to a report in National Geographic.

The Lost Colony is the name given to the 115 men, women and children lost to history after settling in Dare County in 1587. John White, the leader of that colony, went back to England for more supplies, but the Anglo-Spanish War delayed his return to the colony.

When he did return, he found a fortified but abandoned settlement. The only clues to the fate of the colonists was the word "CROATOAN" carved into the fence guarding the settlement and "CRO" carved into a tree.

In 2020, a pair of discoveries near Roanoke Island lend more credence to the theory that the colonist split up into multiple camps and likely assimilated with Native Americans.

The first discovery happened on Hatteras Island about 50 miles south of Roanoke Island. The second, which happened a few months later, took place about 50 miles west of the island on a bluff overlooking the Albemarle Sound.

Both discoveries included pottery pieces and other broken crockery--such as plates, bowls, etc.

Other archaeologists aren't so sure.

"I am skeptical," East Carolina University archaeologist Charles Ewen said. "They are looking to prove rather than seeking to disprove their theory, which is the scientific way."

Ewen said the dating of the pottery found at both locations doesn't exclude the possibility that the pottery belonged to settlers who arrived decades later.

The discoveries were also found mixed with soil plowed in subsequent centuries by later settlers and enslaved people.

So for now, the smoking gun of the Lost Colony remains an enigma. The ultimate fate of that colony continues to be a hotly debated topic.