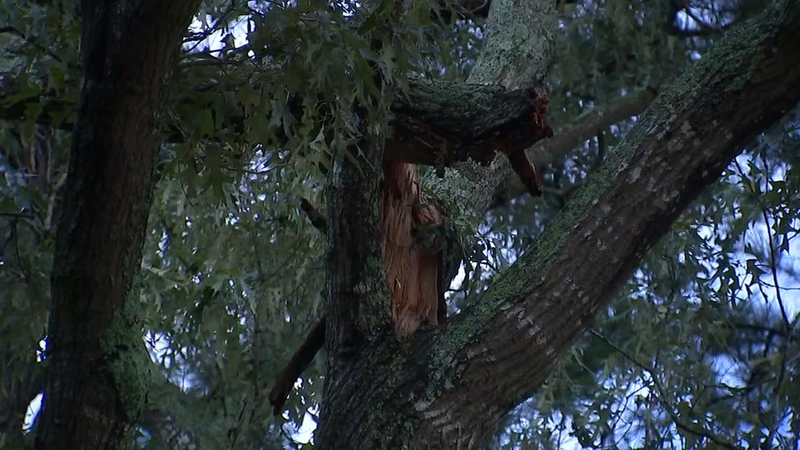 FAYETTEVILLE, N.C. (WTVD) -- In the aftermath of Hurricane Florence, several tree companies are in the area offering to do tree removal and clean-up from the storm. But beware, you need to do your research before hiring just anyone for the job.

Payton Green paid Mac and Mac Tree Removal $2,800 upfront to take down a tree in her Fayetteville backyard. After she handed over the money, Green said John McNeil, the owner, told her they'd take the tree down right away.

"I was afraid it was going to fall right on there," she said, pointing to her house.

Green paid McNeil on June 13th, but weeks later the tree was still standing tall. Green said she kept getting excuse after excuse from McNeil about why his company couldn't do the job.

"It's so stressful, and I can't afford to get stressed," Green said.

Green emailed ABC11. Troubleshooter Diane Wilson got in touch with the company and learned Green's job was on McNeil's schedule. He said the job would get done, but bad weather and personal issues had caused delays.

Eventually, a crew came and cut down the major limbs of the tree, but not the entire tree. The crew also left Green with a mess in her backyard: tree limbs on the ground and debris scattered everywhere.

"He was supposed to clean up everything," Green said. The contract does state that the company is responsible for the removal of the debris from the property.

I called and texted McNeil again and again, but he never came back. Green said city crews and the rental company next door came and helped Payton clean up all of the debris.

She said she learned her lesson and will always check before hiring another crew.

"I went to the BBB; there were already eight complaints, and I made number nine," Green said.

That's good advice. Take time to research a company and see what others are saying about them before hiring. Also, make sure the company is insured.