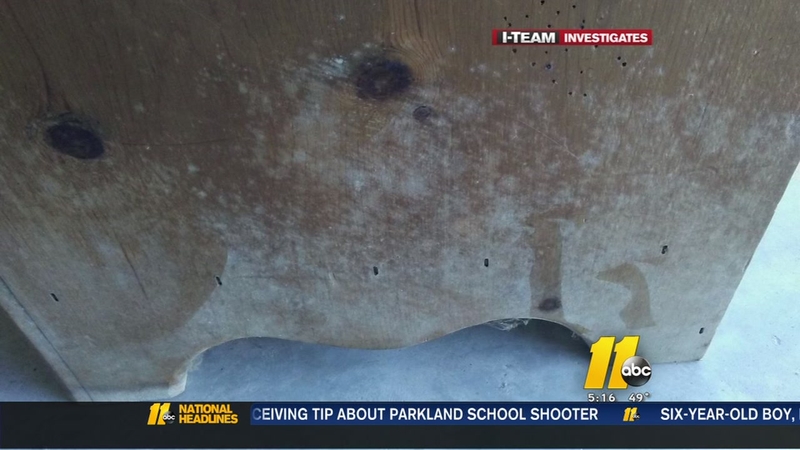 RALEIGH, NC (WTVD) -- When you store your items in a storage unit, how much protection do you have if something goes wrong? A Raleigh couple learned the hard way that even though they bought the extra insurance and had renter's insurance, they are still out thousands of dollars after they discovered mold in the items they stored in a unit.

Becky and Dave McKinnon were building a new house after selling their former home. So they needed put the majority of their household items in storage while construction finished on their new home.

Dave said he wanted a climate controlled unit since their items were going to be stored there in the heat of summer. Fast forward the four months, when it was time to get their items out of storage and they learned the bad news.

A Raleigh couple is out thousands of dollars after they discovered mold in the items they stored in a storage unit.

"When we started pulling stuff out, and I was there with the movers, and the first thing that came out was a desk table. The movers said, 'You've got mold,'" Dave said. As they got more items out of their storage unit, they discovered mold on many of their items.

"All total we'll probably be out about the neighborhood of $10,000 to replace everything," Dave said.

The McKinnon's paid a company to confirm it was in fact mold on their items. "Perturbed about being presented with a climate controlled storage unit and our furnishings and personal items come out of there full of mold," said Dave.

He went to the office of the Public Storage but didn't get good news there. Dave said he was told by the employees that they were "Very apologetic, sorry for your loss," but there's nothing they could do.

The McKinnon's did pay for the extra insurance when they signed their agreement with Public Storage so they thought that would cover their loss, but there was more bad news.

The insurance agreement states despite having up to $3,000 in coverage when it comes to fungus also known as mold the policy only pays up to $250.00, minus the $100.00 deductible.

Dave wanted clarification on what climate controlled meant when it comes to Public Storage, and the Regional Vice President emailed Dave saying, "We classified buildings with HVAC systems that control temperature to a range of 55 degrees and 80 degrees Fahrenheit as climate controlled."

Not happy, Dave got in touch with me. No one from Public Storage had any comment to my requests.

The company did respond to Dave's complaint with the NC Attorney General's Office.

In a letter, the legal counsel for Public Storage points out that as part of the company's rental agreement it states:

The McKinnon's also had renter's insurance, but mold isn't covered either under that policy as Dave says since there was no flood, leak or power outage documented that caused the mold.

"It's been very upsetting because it has consumed a huge amount of our time," Dave said.

The best advice is to read the small print in the agreements with storage companies. The majority of contracts or agreements state that all property is stored at the occupant's sole risk.