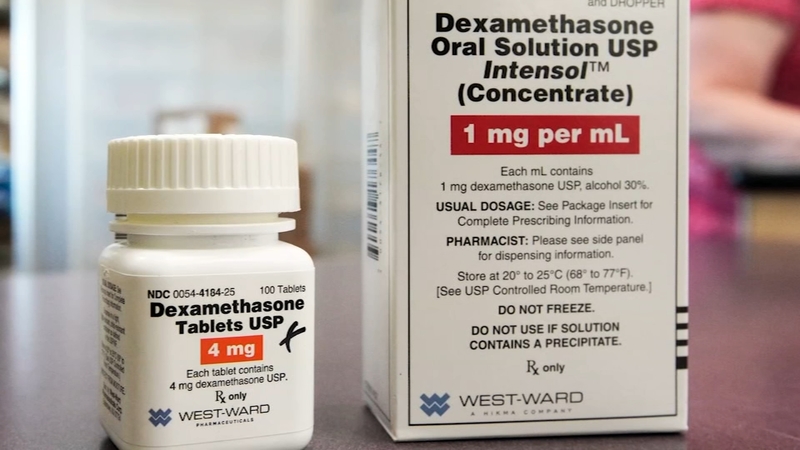 The President, who has been at the military hospital since Friday, has received a combination of the drug remdesivir and the steroid dexamethasone--which relieves inflamation and asthma symptoms--as part of his treatment.

"If you're admitted to the Duke Hospital today with symptoms requiring dexamethasone and remdesivir, it would at least infer that you've had moderately severe symptoms and required some oxygen," said Dr. Cameron Wolfe, an infectious disease specialist and associate professor at Duke University's School of Medicine.

"At this point, it is standard of care for patients who are eligible," added Dr. Sachin Patel, a pulmonary critical care physician at WakeMed.

However, there is far less information available about an experimental antibody cocktail, made by Regeneron, that the president received on Friday.

"That is not a treatment that's available to us. That is not something is widely studied right now in the population that we're taking care of. So at this point, it's an experimental therapy," said Dr. Patel.

Currently, the drug is still in clinical trials, which are taking place at Duke.

"There's a couple of very similar products in development. The main ones that we're trying to run some research protocols through are actually large NIH-(National Institutes of Health)funded trials. They're really looking both to see can they be helpful to prevent people as an outpatient getting more sick. That's clearly where it was used for the president. Or if you're sick enough to already be in the hospital with viral pneumonia, does it help accelerate your recovery? Again, we don't know the answer to that yet. These are early-phase clinical trials. I think we're hopeful that the theory will work, and I'm sure that's why it was considered for the president because there's are very few other products as an outpatient that can help this disease prevent progression. But I think (viewers) should be cautious to not expect that these would be standard approaches outside of a clinical trial," said Dr. Wolfe.

Dr. Wolfe urged further patience when asked about people requesting the antibody cocktail the president received.
"I think people need to understand where it is in its research phase. I'm sure this will spark interest in that drug, appropriately so. I think people and their clinicians quite frankly need to balance what is interest versus what is science. And I think we need to be able to move these drugs through careful clinical trial such that just because the president has apparently done well with this product doesn't mean that that's going to be true for everyone. And I need to be able to see patients in front of me and give them the best data that I can collect. So far, that data stands very clearly in giving sick hospitalized patients dexamethasone and remdesivir. At the moment, outside of clinical trials, there's not enough data to support monoclonal (antibody) therapy use, although we're certainly hopeful," said Wolfe.

White House physician Dr. Sean Conley said Monday afternoon that Trump has not used any fever-reducing drugs in the past 72 hours and the medical staff remains cautiously optimistic. However, they declined to answer questions about his lung scans, citing HIPAA regulations. They also did not answer questions about when the president's last negative test was, important knowledge for contact tracing purposes, as well as understanding how long he could be infectious.

RELATED: List of those in Trump orbit to contract coronavirus

"From the onset of symptoms to about 20 days after that, once you hit that 20 day mark. In general your body is not fighting the active infection, it's more the inflammation that it's causing to your body so you're not really at risk of spreading it that much," explained Dr. Patel.

The next few days will be critical to see if the virus progresses and how the president continues to respond to treatment.

"Can you recover quickly like he seems to have done? Yeah, that's entirely possible. And obviously we're thrilled that he's out of the hospital and seeming to do well. Is he completely out of his risk period? No, because when people take a real turn for the worse, particularly when they're in their 70's and 80's, that's often a week into their illness. So he hasn't reached that point yet. I'm sure his clinicians will still want to be really careful with him and sort of measuring his progress, even though he's out of the hospital. But so far, so good," said Dr. Wolfe.