'He really needs to be uplifted in our prayers': Sandhills Trump supporters react to news of president's COVID-19 diagnosis 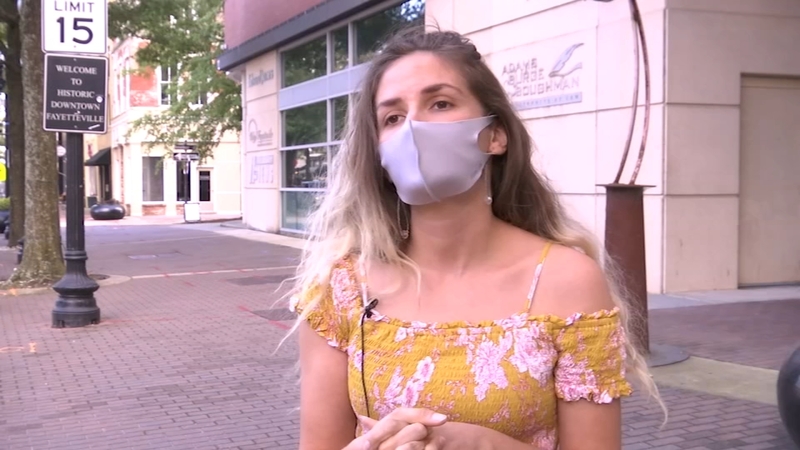 FAYETTEVILLE, N.C. (WTVD) -- Amid the shocking news that President Donald Trump and first lady Melania Trump are being treated for COVID-19, local Trump supporters shared their thoughts on the startling diagnosis.

ABC11 reached out to several Sandhills voters, all of who said they were distraught by the news and sending their thoughts and prayers to the first family.

Michael Booth, a Fayetteville resident and an Army veteran, told ABC11 that this announcement shows that no one is safe from the virus.

"The most powerful man in the free world is the most protected man, who also caught it," Booth said.

#NEW: In light of President @realDonaldTrump's #COVID19 diagnosis, we speak to several supporters who attended his Fayetteville rally on September 19. See their reaction at 11 on @ABC11_WTVD pic.twitter.com/5YSUbJQGVk

Booth was medically retired from the Army after serving for 23 years, being stationed on Fort Bragg during a portion of his career. The veteran identifies as a Republican. When asked about the criticism surrounding the president regarding his approach to the COVID-19 pandemic, Booth said he believes Trump was trying to ease the minds of U.S. residents earlier in the year.

"His reasoning on some of the downplaying was because he didn't want to placate to the panic," Booth said.

Meanwhile, in Fayetteville, Jessica Long, a registered nurse touched on the need to send positivity and love to the president, who is in the midst of a contentious reelection campaign.

"He really needs to be uplifted in our prayers," she said. "He's the president of our nation."

Long told ABC 11 that she attended Trump's rally at Fayetteville Regional Airport on September 19, and she added that she knew the risk of attending the event. Despite the controversy around Trump's response to COVID-19 and his current diagnosis, Long, who said she is conservative, said it won't sway her vote November 3.

"I knew that the President knew his risk, you know, based on the mortality numbers and such ... but there are other issues that I'm voting for the president besides COVID," Long said.

A registered nurse who treats patients with COVID-19, Long said wearing a mask is important to reduce the risk of spread.

David Stentz, a Hoke County resident, tells ABC11 that he attended several North Carolina rallies, including the most recent Fayetteville one. He said he's an independent voter and said the virus has affected people he knows but he believes it has also been politicized.

"I have a couple of close friends who have COVID and we've always believed it's a real thing," Stentz said.

"He does believe that we've got to keep on going because this corona is going to be over, but we've got to be able to roll on after it's over," Stentz said.