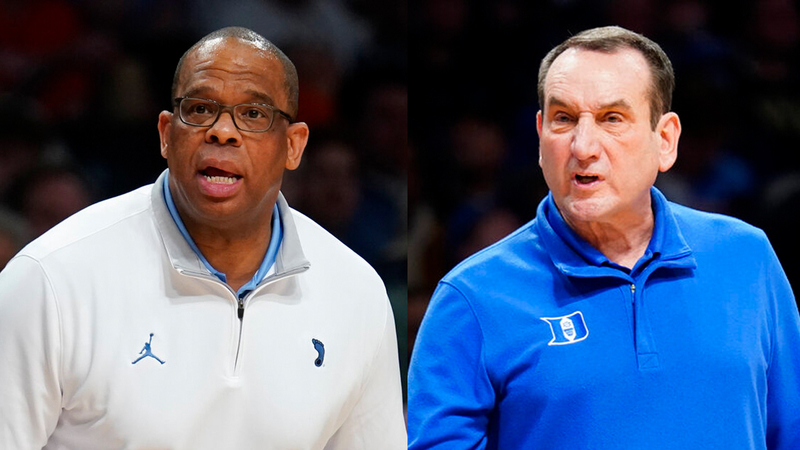 NEW ORLEANS (WTVD) -- College basketball history will be made this weekend. Rivals Duke and North Carolina will meet for the first time ever in the NCAA tournament.

Making this year even more unique is that it represents a time of change for both programs. UNC is in the first year with its first Black head coach -- former Tar Heel player Hubert Davis. Meanwhile, Duke is in the final year of Hall of Fame coach Mike Krzyzewski's career. Duke will soon be coached by a former player of its own, Jon Scheyer.

But before the curtain sets on this historic season, the teams must meet one more time.

They already split the regular season, with Duke dominating North Carolina in the Dean E. Smith Center but then UNC paying Duke back in kind by denying the Blue Devils a fairytale ending for Coach K's final home game.

Duke coach Mike Krzyzewski discuss his last trip to the Final Four and the matchup against rival North Carolina.

UNC coach Hubert Davis discusses the Final Four and the historic matchup with Duke on Thursday in New Orleans.

The Blue Devils are a No. 2 seed in the tournament and the Tar Heels are a No. 8 seed and weren't expected by most observers to be here. But both teams appear to be playing their best basketball at the right time.

Since 1984, Herb Neubauer has missed just one Duke home game. He'll watch this Final Four from home to allow another lucky fan to unwittingly attend.

From head to toe, Dennis Garrett rides hard for UNC-Chapel-Hill. But his home in east Durham takes nostalgia to a new level.