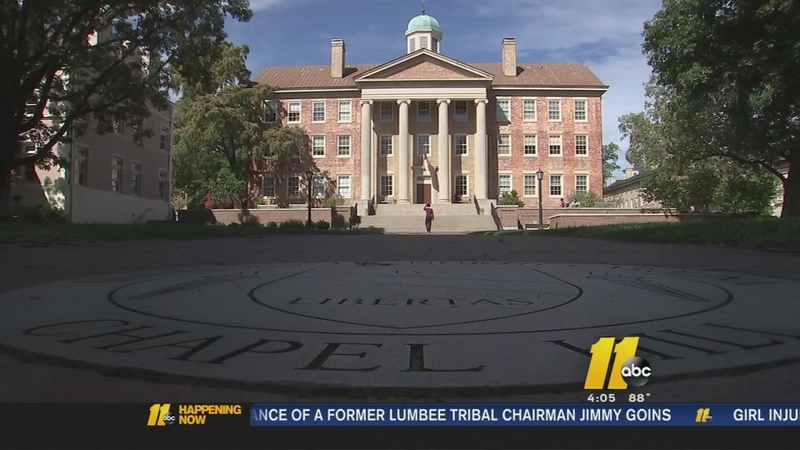 CHAPEL HILL, N.C. (WTVD) -- The University of North Carolina at Chapel Hill received a "very serious" punishment Thursday in the wake of the damaging Wainstein report on academic fraud.

The agency that provides accreditation to institutes of higher learning, the Southern Association of Colleges and Schools, announced its decision to place UNC on probation for 12 months.

"The board intended to send a serious message with the 12-month probation," SACS President Dr. Belle S. Wheelan said. "The issue that academic integrity is at the heart of everything our institutions do ... they need to take every step possible to ensure the academic integrity of their programs and degrees."

Possible punishment from the SACS board included the option of stripping UNC of its accreditation.

UNC has a year to respond to the agency and explain exactly how it plans on addressing the violations.

"All great institutions encounter challenges at one time or another," Chancellor Carol Folt said in a statement. "Recent years prove that Carolina is no exception. The important question is how the University has responded and will continue to respond."

President of SACS on #UNC's probation: "Academic integrity is at the heart of everything our institutions do." pic.twitter.com/b29F79bz3R

"SACS places its member institutions on probation only rarely. One can only assume that the decision in this case reflected SACS's frustration with the University's pattern of less-than-forthright testimony about its past failures," UNC history professor Jay Smith said in a statement following the announcement. "Let's all hope that UNC finally learns a hard lesson from this embarrassing punishment."

Smith is also a co-author of a book on the academic scandal.

Mary Willingham - the former academic adviser who publicly criticized the reading levels of student athletes, and self-proclaimed whistle blower - filed a lawsuit against UNC claiming she was retaliated against for speaking out. She and Smith have co-written a book called "Cheated: The UNC Scandal, the Education of Athletes, and the Future of Big-Time College Sports."