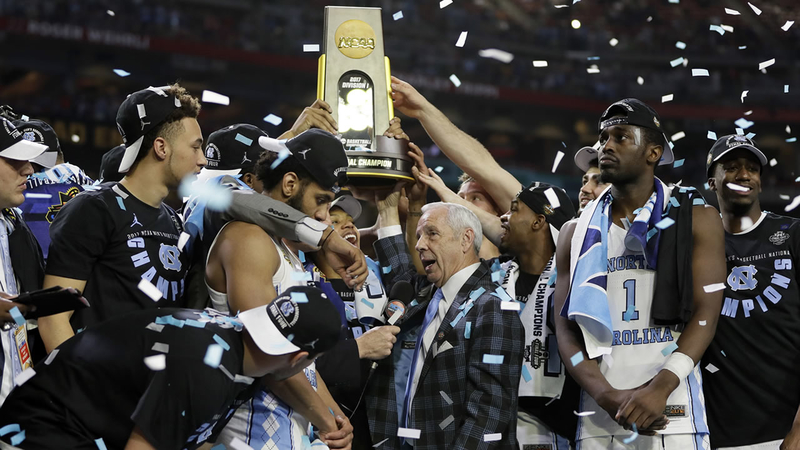 GLENDALE, Arizona (WTVD) -- It was a hard fought slug fest down to the wire, but UNC came out victorious 71-65 over Gonzaga on Monday night.

After the game, Coach Roy Williams said "I don't think either team played really, really well," but he was proud of his guys for staying in the fight.

At the post-game news conference, Williams described the victory as a "fantastic feeling.

"These guys made big time plays," he said. "There's no better feeling as a coach."

"I wanted to see this confetti fall on us and we're the winners," said Carolina's Joel Berry II, who led the Heels with 22 points. "We came out here and we competed. It came down to the last second, but we're national champs now."

Berry, who has struggled in the post season with sprained ankle, said he just gritted through the last game.

"Some were short," he said. "But the ones that we needed went in."

There were whistles everywhere in the second half of the NCAA championship game - and it certainly kept Gonzaga and North Carolina from getting into any kind of flow.

The foul calls stirred up boos from the crowd and backlash on social media, including a tweet from LeBron James, who said: "Man I can't watch this anymore man!"

Justin Jackson delivered the go-ahead 3-point play with 1:40 left Monday and North Carolina pulled away for a win that washed away a year's worth of heartache.

It was, in North Carolina's words, a redemption tour - filled with extra time on the practice court and the weight room, all fueled by a devastating loss in last year's title game on Kris Jenkins' 3-point dagger at the buzzer for Villanova.

Most of Roy Williams' players returned for another run. To say everything went right for them at this Final Four would not be the truth.

Nate joins his bro as a champ! pic.twitter.com/YfyGRIsLL8

The Tar Heels followed a terrible-shooting night in the semifinal with an equally ice-cold performance in the final - going 4 for 27 from 3-point land.

Gonzaga, helped by 8 straight points from Nigel Williams-Goss, took a 2-point lead with 1:52 left, but the next possession was the game-changer.

Jackson took a zinger of a pass under the basket from Theo Pinson and converted the shot, then the ensuing free throw to take the lead for good. Moments later, Goss-Williams twisted his ankle and could not elevate for a jumper that would've given the Bulldogs the lead.

Isaiah Hicks made a basket to push the lead to 3, then Kennedy Meeks, in foul trouble all night, blocked Williams-Goss' shot and Jackson got a slam on the other end to put some icing on title No. 6 for the Tar Heels (33-7).

Tar Heels fans can greet the UNC team Tuesday evening after they travel back from Arizona for a homecoming celebration at the Dean Smith Center.