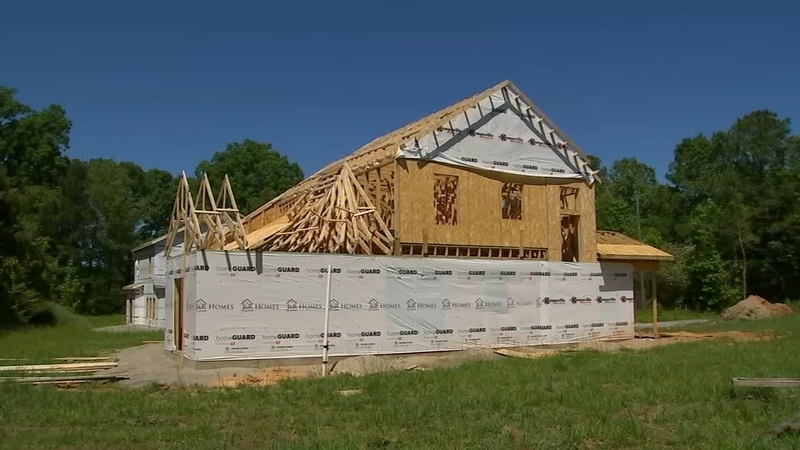 SANFORD, N.C. (WTVD) -- A Lee County building company is leaving many of its customers with unfinished homes and thousands of dollars worth of liens of their properties.

UPDATE: This building company has filed for bankruptcy and surrendered its license.

"You're sold something--you're sold this big dream, and then it's just taken away from you," said a frustrated Stephanie Hayden whose husband signed a contract with J&R Homes to build a $340,000 home.

The contract was signed in June of 2021. The couple along with their son were so excited to build this semi-custom home with J&R Homes out of Sanford.

"They sold us a pretty incredible dream of building our dream home within our budget, something that we didn't think we would be able to do at this point in our lives," Hayden said.

Despite paying their builder the deposit, it took months for any work to start.

"They laid the foundation in January. They finally started framing in February. They did not brace the trusses properly. So they have fallen over in the back of the home and they've not done anything since. We were told that our completion date was April 15th. We were supposed to close and move into this house (on) April 15, and we obviously still have not moved in," Hayden explained.

Their home is nowhere close to being finished as the framing isn't even done. To make matters worse, the Haydens went ahead and sold the home they were living in because they believed J&R Homes would finish the home on time as promised.

"We were selling our home before my husband deployed so that way when he got home we can move right into this. My son and I and our two dogs moved in with my brother and sister-in-law and lived with them while my husband was deployed. We're still living with them because my husband is back from deployment."

To date, Hayden says J&R Homes has $12,000 of their money from their initial deposit and upgrades, plus $80,000 of the couple's construction loan. The couple also received an $18,000 lien from the company that supplied the lumber for their home as the company claims J&R didn't pay the bill.

"I've cried a lot. It's been incredibly difficult. It's been emotionally taxing. Financially, we don't know what kind of situation we're going to be in because we are responsible for paying back that construction loan and we're going to be paying for a house that's not even done--that's not even livable, because I mean it's been exposed to the elements for months," Hayden said.

Besides Hayden's home not being finished, she has four other homes being built by J&R Homes around her that are left in unfinished stages. Hayden hopes some kind of action is soon taken against J&R Homes.

"I want to see justice served and I don't want these people to be able to do this to anyone else ever again, because my fear is that they're going to file bankruptcy and then just try to do the same thing over again to people who don't know what they've done, because they've destroyed a lot of families," Hayden said.

Brandon and Christa Honeycutt are in a similar situation with J&R Homes.

"(J&R Homes CEO Daniel Brody) told us the end of February, he said, we're going to be in; I promise you by March 31st," Honeycutt said. While the Honeycutts do have more work done to their home than Hayden, it's still not done.

Honeycutt confronted Brody about the state of his home and said Brody assured him it would get done.

"He basically explained to me that they were behind on some other houses, and they're waiting on a restructuring of the draws from the other homes or from the other lender, so they can get caught up paying all the subs for the work they've done on other projects."

To date, Honeycutt said J&R Homes has gotten about $250,000 of his construction loan, yet many of the sub-contractors who worked on the home filed liens against the property totaling more than $50,000 after they all claim they weren't paid by J&R Homes of Sanford.

"This is our dream home, but we don't have a home. We're having to live with my parents. We have two kids and we can't buy another house. This could ruin our credit. We can't get our funds to even complete the house if we want to so it's more than it being a dream home. We don't have a home to our name," Christa Honeycutt said.

Troubleshooter Diane Wilson tried to get answers from J&R Homes of Sanford. She went to three of their offices listed on contracts but all three doors were locked, and no one was inside. Wilson also emailed and called CEO Daniel Brody and contacted his attorney; still no response.

Several J&R Homes customers also report not getting any response from Brody or anyone associated with J&R Homes. The only communication some of the customers got was at the end of April from the director of sales at J&R Homes explaining that due to extenuating circumstances J&R Homes was contemplating bankruptcy and engaging in a consultation to weigh all options.

"The money has got to be somewhere, because they're not paying the subcontractors with that money," Brandon Honeycutt said.

The North Carolina Attorney General's Office has five complaints on J&R Homes and said it is reviewing the complaints. The NC Licensing Board for General Contractors also has received complaints against J&R Homes LLC. In addition, the board said J&R Homes LLC is a licensed contractor, but J&R Group LLC, which is the group the Honeycutts have a contract with, is not a licensed contractor. The executive director of the board confirms they plan to seek an injunction against J&R Group LLC. If you're a customer of J&R Homes you can file a complaint here.

Besides customers in Lee County, Troubleshooter Diane Wilson also heard from families in Rockingham and Scotland County who also contracted with J&R Homes, and it's a similar story. Their homes sit unfinished and all have thousands of dollars of liens filed on their property.