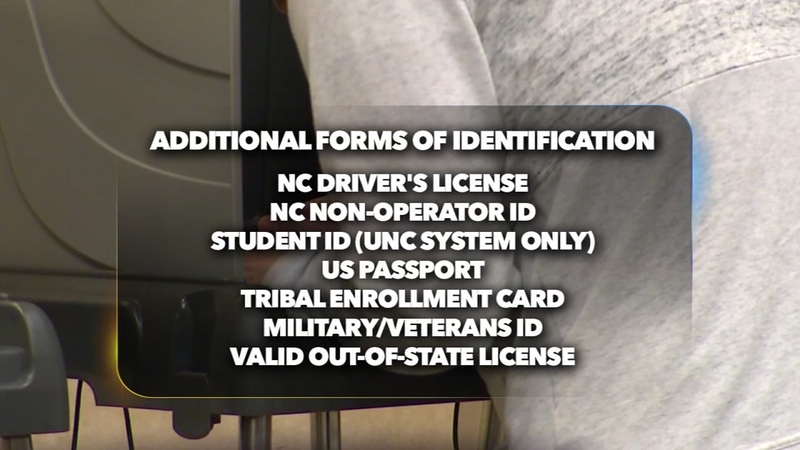 The concept of requiring photo identification to vote was approved by voters in the last election, but the constitutional amendment did not specify exactly what forms of ID would be acceptable -- that's what the General Assembly will have to legislate.

The draft legislation, obtained by ABC11 from the office of Senate President Phil Berger (R-Rockingham), is being shared with Democratic leaders in the Legislature ahead of the special session which begins on Nov. 27. When that session starts, Republicans will still maintain their veto-proof supermajorities in both the House and Senate.

According to the draft, a proposed bill on Voter ID will include the following:

The draft proposal is attached for your review and here are a few of the main points of the bill that we think you will be interested in:

The bill adopts a new "voter photo ID" that has never been used in NC, but is used in SC and has been successful.

o To obtain: a voter needs to be registered and provide Date of Birth + last four of his or her social security number at a county board of elections

Student ID cards from state universities would be a valid form of Voter ID.

Additionally, the following forms of identification would also qualify: NC driver's license, NC non-operator ID card, US passport, tribal enrollment card of federally or state recognized tribe, military or veterans ID card, a valid out of state license or non-driver ID if the voter registers within 90 days of the election. People who are over 70 would be allowed to use an expired ID if they had any of the accepted forms of ID that were unexpired on their 70th birthday.

Reasonable impediment: if a voter shows up and says he or she couldn't get a photo ID but still wants to vote, that voter could sign an affidavit and cast a ballot.

If approved by the General Assembly, the draft as written is already full of significant changes from the first Voter ID bill passed by lawmakers in 2013 and then struck down in federal court. That bill, known more formally as the Voter Integrity and Verification Act, included much stricter limits on accepted IDs, while also eliminating same-day voter registration and ending out-of-precinct voting. The number of early-voting days was also cut while the early-voting hours available stayed stable.

Opponents of Voter ID, including the American Civil Liberties Union, have long been wary of the measure because it argues requiring photo identification unfairly discriminates against poor and minority voters who don't have driver's licenses.

On the day after the midterm election, ACLU spokesman Mike Meno told ABC11 it's possible there could be future legal challenges if the GOP passes a bill that it considers too restrictive.