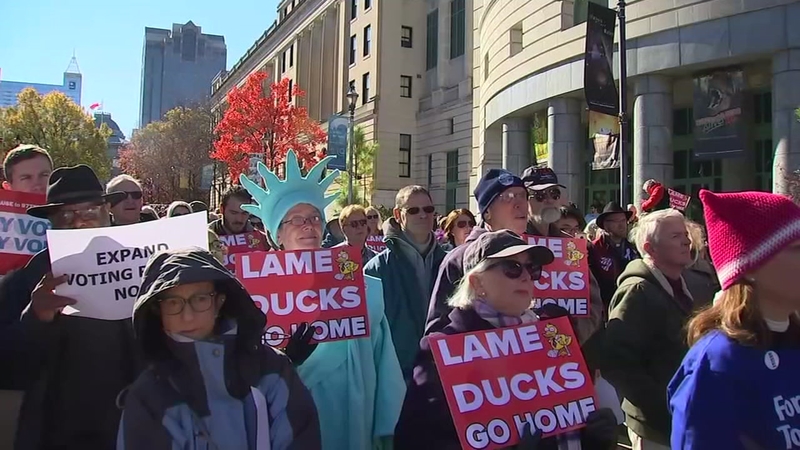 Protesters at the General Assembly

RALEIGH, N.C. (WTVD) -- Hundreds of demonstrators waited in a long line to go through security at the General Assembly. Once they got inside, dozens filed into the gallery while others stood in the rotunda placing tape over their mouths to symbolize how their voice is not being heard by lawmakers.

Protesters are petitioning the GOP-led legislature not to pass Voter ID legislation during the November session.

The line of people waiting right now to get inside General Assembly. The @ncnaacp leading a protest - Demonstrators urging lawmakers not to take action on Voter ID. #abc11 #ncpol pic.twitter.com/HNePZF6l4u

"Stop terrorizing the people with your constitutionally illegitimate power," said North Carolina NAACP President the Rev. Dr. Anthony Spearman. "We are drifting back towards Jim Crow, a society that abridges not only our constitutional right to vote but abridges the opportunity for a moral revival."

Protestors are demanding lawmakers only pass legislation related to Hurricane Florence relief and hold off on Voter ID until the new year.

Republicans are firing back, pointing out that Voter ID was approved by the people in an amendment vote

A silent demonstration now inside the General Assembly - protestors putting tape on their mouths while still sending a message to lawmakers over the Voter ID Law. #ABC11 pic.twitter.com/1ReuJMIXFO

"Voter ID is in the North Carolina Constitution because the people of this state support it overwhelmingly, and Republicans will follow through on that mandate. It's a great irony that the liberal activist organization that planned today's protest is asking a judge to invalidate the votes for the amendment while at the same time accusing us of voter suppression."
Report a correction or typo
Related topics:
politicsraleighncvotingprotestgeneral assemblystate politics
Copyright © 2022 WTVD-TV. All Rights Reserved.
TOP STORIES
Many seek N95 masks amid high COVID cases
School closings and delays
After the omicron wave, what's next for the COVID pandemic?
Delay opening Monday at COVID-19 testing sites
Mostly Sunny, Little Warmer Tomorrow
One person injured in Raleigh shooting, police investigating
Wake school board holding meeting Tuesday
Show More
Tax filing season starts Monday. What to expect for 2022
Aerial views of Triangle area covered in snow
Rescuers use sausage dangling from drone to lure runaway dog to safety
UNC police investigating armed robbery
Booster shots needed against omicron, CDC studies show
More TOP STORIES News