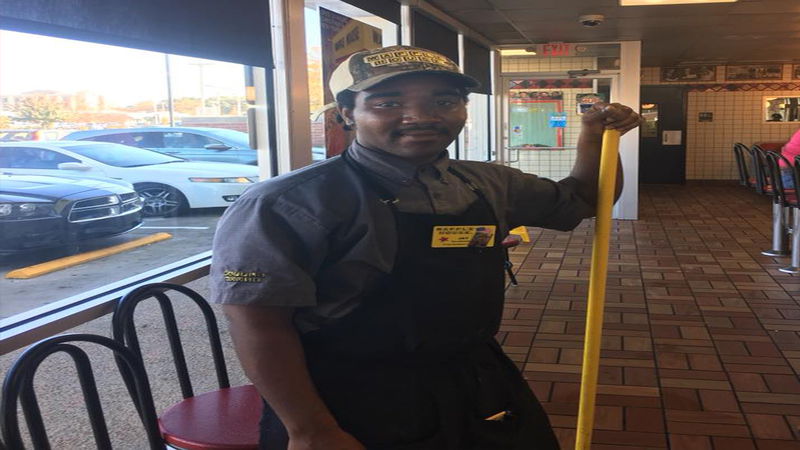 WILSON (WTVD) -- Denise Baker said she was at the Waffle House on South Tarboro Street in Wilson on Wednesday when an employee saved her life - an act of kindness that's so selfless, she's chalking it up to her "guardian angel."

According to her Facebook page, she was at the restaurant when her phone rang. She quickly answered and then started eating.

And that's when things turned south ...

Baker said she starting choking on a piece of country ham and couldn't breathe.

"Start choking like seriously choking can't breathe at all kind of choking," she wrote on Facebook. "Drop phone stand up and start banging on the counter to get attention."

She told ABC11 she thought she was going to die.

"I (thought I) was actually going to die in the Waffle House because of choking on one piece country ham," she said. "First bite, I noticed it didn't quite go down well, and I started hitting my chest, and at first, no one paid attention. I was very, very scared."

Baker said she quickly put her hands around her neck, signaling to employees that she couldn't breathe.

And that's when she said Jay saved her life, adding that the other employees did nothing.

"I don't think they understood the universal sign language for choking, which I did," she explained. "(There was) a lot of confusion at first, then one of the customers said, 'I think she's choking!' At which time Jay came from around the counter, grabbed me, and performed the Heimlich maneuver ... twice."

Baker said she's a two-time cancer survivor who has undergone radiation for her neck.

"I do have a little trouble swallowing food, but I have never been to the point of choking," she said.

Baker said she's thankful to Jay for saving her life and calls him her guardian angel.

"To Jay, I would like to say, you have no idea the impact you've had on my life today. Me being able to continue my life because of his heroic action by standing up and performing while others stood around and watched ... Thank you, Jay. God bless!"