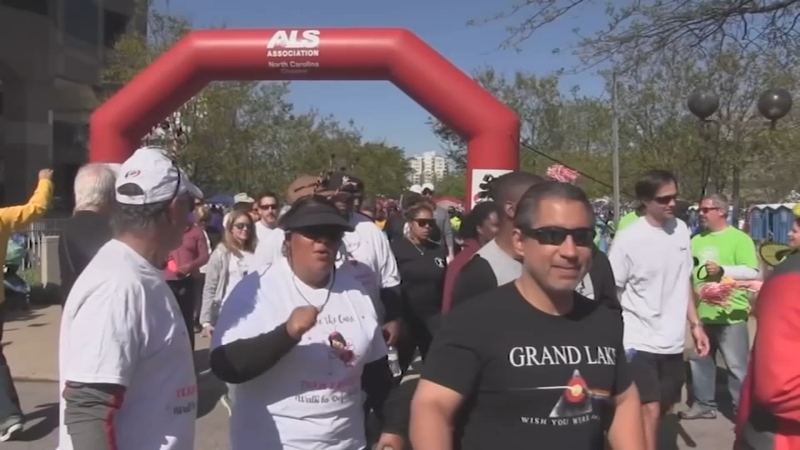 DURHAM, N.C. (WTVD) -- People who saw Larry Stogner out and about during his years as ABC11's lead anchor noticed his height, which along with his familiar, authoritative voice, made lasting impressions on viewers. We remember that and his courage when the story was about his own health challenge.

He faced the camera in the studio that we've named after him, announced that he had ALS then said, "There is no cure."

"The ALS progression was much more rapid than we thought it would be. He died 21 months after diagnosis. Quite a shock to all of us" said his wife, Bobbi Stogner. She shared memories of their time together as ALS took a toll on her husband after he participated in the viral Ice Bucket Challenge to raise awareness of the disease.

Join the fight against ALS

"He did that in the summer of 2014, not knowing that six months later he would be diagnosed with ALS. So it's a cause that's close to all of us," she said.

Before his death in 2016, Larry participated in the annual Walk to Defeat ALS that brought thousands of people to downtown Raleigh.

Full interview with Bobbi Stogner ahead of Saturday's Walk to Defeat ALS in Raleigh.

"At first he was walking and talking, quite healthy from outward appearance. The second time we went, he could still walk, but he was very tired. So he was sitting in a wheelchair," she said.

She appreciates the community and corporate support for the fundraiser and now, as we prepare for Saturday's walk, she also knows we'll have a team in his name among the crowds gathered at Halifax Mall in Raleigh.

"Because you also lost a colleague and a friend, so it's personal for you. But there are so many other people who benefit from that, and I'm so grateful," she said. "I think I can speak on behalf of all ALS families, grateful for everything that you do to keep that in the forefront, to raise awareness. To raise funds."

The money raised supports the ALS Association, research to defeat the disease, support for those families and lobbying in Washington D.C., for more resources to help those affected by the disease.