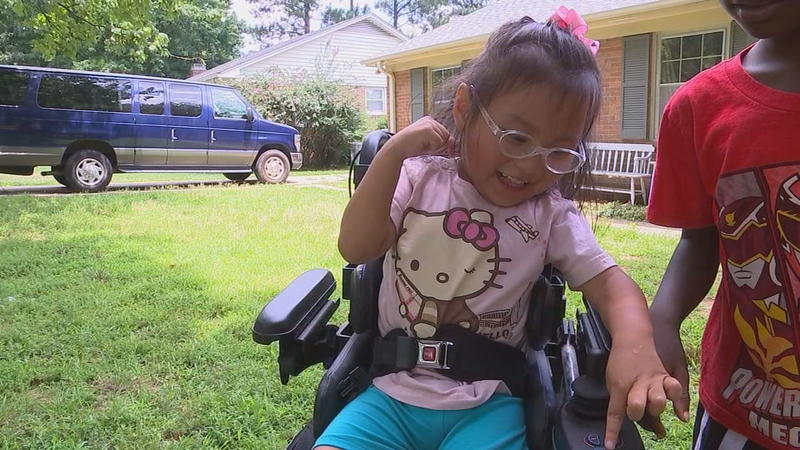 RALEIGH (WTVD) -- At 4 years old, Zoe Dingle has already overcome many obstacles. Zoe has cerebral palsy and doesn't walk or sit independently. Despite all of that, Zoe still has a smile on her face and zooms around on her motorized wheelchair. The big problem is that Zoe can't take her motorized wheelchair anywhere besides her home.

The motorized wheelchair weighs over 160 pounds. Zoe's mom, Shannon Dingle, says they have tried lifting it in and out of their van, but it's just too heavy. That's why Shannon is trying to get Zoe approved for funding that would enable their family van to be modified to make it handicapped accessible so Zoe can use her motorized wheelchair at school and other places.

Zoe qualifies for, and is part of, the Community Alternatives Program for Children, also known as the CAP/C Program. It's a Medicaid waiver program for medically fragile kids. As part of that program, there is funding specifically for vehicle modifications. Shannon says Zoe qualifies for the vehicle modification funding, but despite turning in the paperwork to the state in May they are still waiting.

"They have dropped the ball. We did everything like we were supposed to and so far they haven't even processed it," Shannon said.

If Zoe got the CAP/C money, Shannon says it would pay for an electric lift and the wheelchair can be lifted in and out of the van. Shannon blames the delay on getting their application processed on the state as it does not have a new waiver in place. The current waiver expired in 2015, and the state has been operating on the old waiver.

"This is a state agency that's job is to serve vulnerable kids and they are not doing their jobs," Shannon added.

We first told you about this issue in May.

I reached out to the NC Department of Health and Human Services and a rep tells me that despite operating on the old waiver it has not impacted how claims are being processed.

"The existing CAP/C waiver operates until the amended waiver is approved by the Centers for Medicaid and Medicare Services," she added.

She insists, the federal and state funding for this program remains unchanged in the meantime.

Shortly after I reached out to the state, Shannon heard from Zoe's case worker. Shannon says she was told Zoe will qualify for a portion of the funds they requested for vehicle modifications, but not all of them. Shannon says that's due to how long Zoe has been in the CAP/C Program. Shannon says the amount she was told Zoe will be approved for should cover the majority of the cost of the lift. While Shannon is relieved they can hopefully get the electric lift for the van, she's frustrated with all the obstacles they've faced with the CAP/C program recently.

"We are tired already. We shouldn't have to do all this extra work to get what our kids are entitled to anyways," she said.

When it comes to that waiver the state is still operating on that expired in 2015, a state rep said several listening sessions are being held across the state to get feedback in how these programs can move forward.

A rep also said if anyone needs assistance in receiving services under the CAP/C and CAP/D programs as they are currently written to contact the Division of Medical Assistance at (919) 855-4340.