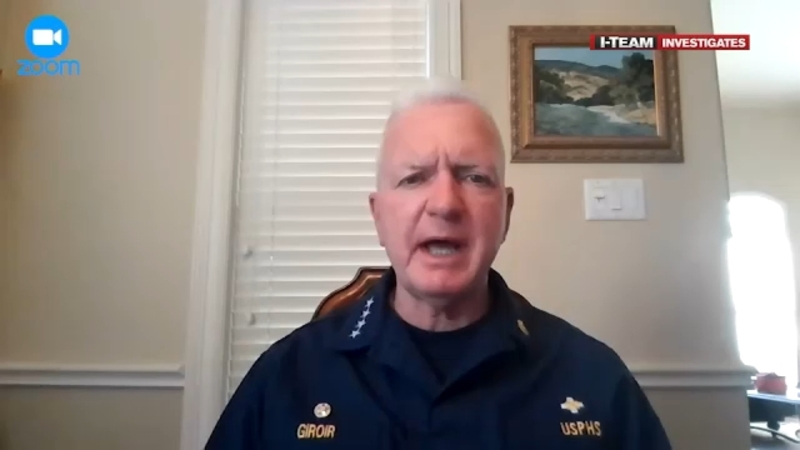 RALEIGH (WTVD) -- A key member of the White House Coronavirus Task Force is warning North Carolinians to double down on wearing masks and social distancing despite the fact that safe and effective vaccines may soon be available.

"What's different now is the rate of change and the slope," Adm. Brett P. Giroir, Assistant Secretary for Health at the U.S. Department of Health and Human Services (HHS), said in an exclusive interview. "The rate of the rise in cases is much more dramatic. It's coming on us more quickly and more rapidly."

The numbers back up the assessment:


The Admiral, who has unofficially been dubbed the "Testing Czar", has been key in guiding states to effectively utilize federal resources to boost testing in all communities. According to Giroir, the U.S. made more than 125 million tests available in November alone.

Q&A with White House COVID-19 Task Force member: 'This is as real as it gets'
EMBED More News Videos

"The rate of the rise in cases is much more dramatic," said Adm. Brett P. Giroir at the U.S. Department of Health and Human Services. "It's coming on us more quickly and more rapidly."

"We want the perfect testing system and that is we want highly specific, highly sensitive, very inexpensive tests that can be used by anyone at any time," he said. "I think it's realistic by the mid-spring that we'll have 200 million point of care tests. Right now we have 50-60 million. And remember we're going to have that at a time when God-willing the disease will be coming down."

Who will get the COVID-19 vaccine first in North Carolina?
EMBED More News Videos

North Carolina's 148-page-long Vaccination Plan is full of details that spell out who is going to be receiving the vaccine when it is distributed.

The vast majority of officials and the medical community agree the disease can only come down once vaccines are widely distributed enough to achieve a certain herd immunity, which Giroir estimates is 70 percent to 80 percent of the population. Herd immunity, of course, can also be achieved if a certain percentage of the population gets infected with the virus - but that could prove deadly.

"If we have herd immunity by everyone getting the virus, we're going to have millions of people die. So we're trying to keep that rate low. Everybody get the vaccine, everybody get immune and we'll be in good shape," he said.

Duke experts discuss the need for COVID-19 vaccine trials in children
While the FDA could soon give manufacturers Pfizer and Moderna Emergency Use Authorization for their vaccine candidates, that is far from a guarantee to win over a skeptical public.

"I want people to understand these are modern vaccines," Adm. Giroir said. "Not that the old vaccines were dirty or bad, but these are sophisticated vaccines, and with Moderna and Pfizer, the vaccines don't have killed virus. It's a specific genetic marker that creates a specific protein that stops the virus in its tracks. That's why it's so safe and so effective."

The skepticism, however, appears to move beyond just those nervous about a vaccine.

"I am continually surprised by the number of people who slam me on Twitter for 'propagating lies' and the 'fake pandemic.' The fact is we've had a quarter million Americans die of this and we're losing 2-3 thousand Americans a day. This is as real as it gets."
Report a correction or typo
Related topics:
health & fitnessraleighthe white housecoronavirus pandemicpandemiccovid 19 pandemiccovid 19
Copyright © 2022 WTVD-TV. All Rights Reserved.
THE WHITE HOUSE
By the numbers: Stats that tell story of Biden's first year
Biden, 1 year in, says nation weary from COVID but in a better place
USPS free COVID tests begin, but doubts persist
400M N95 masks available to the public for free starting next week
TOP STORIES
LIVE: Snow likely to stick around due to cold temperatures
LIVE: Chopper 11HD flies over snow covered central NC
Slick roads found across central NC
Truck with 100 monkeys crashes, 1 still on the loose, police say
How to make snow cream
Delta flight slides off taxiway after landing at RDU
Anti-mask parent threatens to bring guns to school: 'Loaded and ready'
Show More
Laundrie claimed responsibility for Petito's death in notebook: FBI
2 NYPD officers shot, 1 fatally, responding to domestic violence call
Person struck by vehicle on Western Blvd in Raleigh
City, county governments close services as wintry weather hits NC
LATEST: Deadline extended for House Wake COVID relief program
More TOP STORIES News