'He tried to punch my face': Cary police investigate attacks on greenway, victims say they may have been racially-motivated 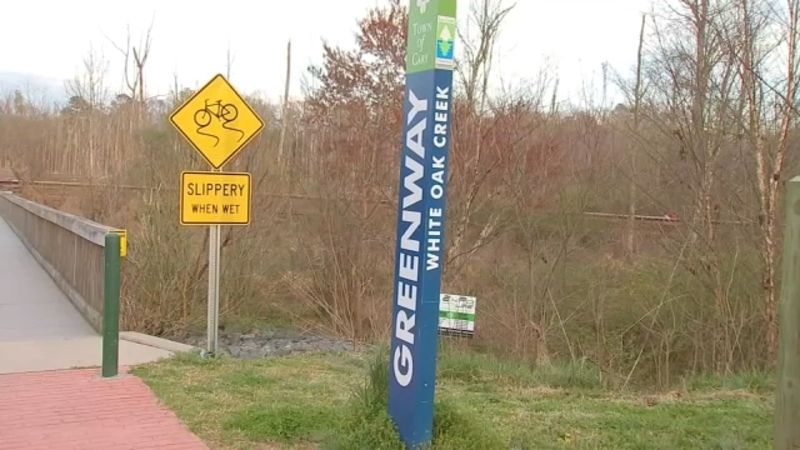 The victims, an Iranian man and a Chinese-American woman, told ABC11 they believe the attacks might have been racially motivated.

The incidents happened just before 11 a.m. Wednesday on the White Oak Creek Greenway.

"He tried to punch my face, I remember, because I see his hand and I turn my face like that and because I hold the phone, I drop the phone," said Morteza Mirdamadi.

Mirdamadi, who has lived in Cary for more than 20 years and walks the greenway nearly every day, said he had been chatting with a friend on the phone in his native language, Farsi, when the jogger running past, crossed the path to get closer and tried throwing a punch at him.

Mirdamadi said he ducked and dropped his cell phone and when he bent over to pick it up, saw a water bottle flying past his head.

"I said if you touch me I call the cops, you cannot touch me," he said. "He spit to me two times."

Walking on the greenway, just behind Mirdamadi, a Chinese American woman and her parents were walking with her dog when they said they saw the man spit at Mirdamadi.

"We're fearful that he may be targeting us as well," said the woman, who did not want to be identified.

She said the jogger ran past them and disappeared briefly before coming back.

Kane Ma said the shootings in Atlanta last week didn't sit well with him and they compelled him to share his story.

She snapped a photo and her father took a short video of him as the man ran past them a second time.

"I turn around because I'm standing in front and that's when my dad said something hit him in the back," she said.

As the man was yelling at them, her father told her to call 911.

In shock, she said she couldn't make out what the man was saying and neither could Mirdamadi.

"He looked like he hate me," he said. "Something against me, I don't know."

They said there were other people on the trail, but they were the only ones targeted and they think they know why.

"I definitely think that he viewed us as foreigners, and he didn't like that," said the woman. "There's just a lot of hate in people's hearts, and it's just horrible."

"He's dangerous," said Mirdamadi. "He punched. Maybe tomorrow, take the knife. Maybe the day after that, take the gun."

On the 911 call, the caller can be heard saying, "we are on the White Oak Trail in Cary and we were attacked by a runner."

When the dispatcher inquires after a pause in the exchange, the caller replies: "Sorry we were just attacked again."

Moments later, "my apologies, this person just keeps coming back and running towards us again"

Much of the call reveals that the caller was walking to her car and the dispatcher staying on the phone with her until she gets there.

"He came by multiple times, saying insults and threw a water bottle at us and spit on another person on the trail. He is in a blue top and he is running towards the front of the trail. He has run back towards us about 4 times already."

Dispatcher: "Was there something that started it?"

"No, we were just walking ... he was running and he attacked a person that was behind us but we didn't see the full incident. It wasn't until he, he hit the guy's phone out of his hand. Another guy that was walking and then spit on him. He was running ahead of us and didn't say anything and as we were walking he eventually ran back and ran by us multiple times and threw things at us."

Lt. John Reeves with Cary Police released a statement to ABC11 that said in part:

"We take reports of harassment, intimidation and threats of violence very seriously and we are actively investigating this incident."