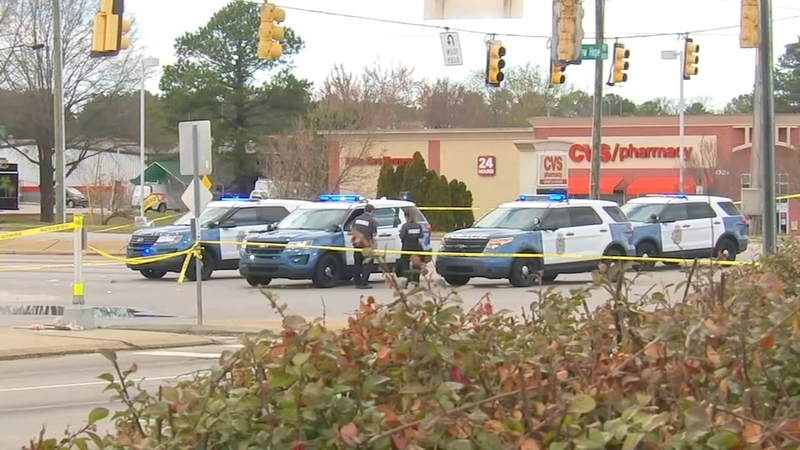 RALEIGH, N.C. (WTVD) -- The man accused of trying to kill six people, including two police officers, was supposed to appear in court Friday afternoon, but his case was postponed.

Video showed police tackling and arresting Willie Daniels on New Bern Avenue following a wild series of events that culminated in a shootout in the middle of the street.

Knightdale Police Department said it all started Thursday morning when Daniels went to the Country Hearth Inn on Money Drive. Daniels was seen banging on several doors in an attempt to find his wife.

When he failed to find her, he left the hotel and went home. His neighbors told police Daniels abandoned his car in the street and started breaking the windows of his own home. Investigators said Daniels then set fire to the home before leaving.

He then traveled to a Raleigh apartment where police said he tried to "terrorize" and murder two people. There, he broke into and stole a 2015 Toyota Camry and drove off.

The man accused of trying to kill six people, including two police officers, was supposed to appear in court Friday afternoon, but his case was postponed.

He's also accused of shooting someone on Brockton Drive in Raleigh. That victim was taken to the hospital with serious injuries.

Raleigh Police Department soon got involved and tracked down Daniels, which led to a police chase.

According to arrest warrants, Daniels crashed into and opened fire on a silver Honda Accord with two people inside near New Hope Road and New Bern Avenue.

He then got into a shootout with RPD, firing multiple rounds at officers, striking at least two patrol vehicles. The officers returned fire but did not hit anyone.

Sharon Pope was headed to lunch waiting at the intersection of New Bern Avenue and New Hope Church Road when Daniels ran through the red light. She saw his car spinning around.

"He was directly across from me and he was shooting when he stepped out of the car," Pope said. "TThe shooter was 15-20 feet from us, and he wanted to make sure he didn't come toward my vehicle. I have never experienced anything like this. is he going to turn around and start shooting cars?"

Pope said when he "finished shooting his first gun and it was empty, he walked back to his car and came out with the AR-15."

Raleigh Police Chief Estella Patterson said it was an unfortunate situation but said she is proud of how her officers handled it. She said it was clear the man was going through a mental crisis

This is video of the shootout on New Bern Avenue this afternoon. 😯@raleighpolice say the man in the yellow shirt is charged with attempted murder and 3 counts of shooting into an occupied car #ABC11 pic.twitter.com/eTl9zL9Bgn

Officers eventually surrounded Daniels in the street. They used a stun gun on him and tackled him to the ground before handcuffing him and taking him into custody.

"As I reviewed the videos and I spoke to my officers, I knew that that was a very traumatic situation for both parties being shot at as well as the individual doing the shooting but I'm just thankful the outcome was a positive one in this case," Patterson said.

"I'm just so grateful again of that because when we consider the backdrop, all the vehicles in that intersection, you have individuals walking, pedestrians in the roadway that could've gone really bad, but I'm so grateful it didn't," she said.

Chief of @raleighpolice Stella Patterson tonight commending her officers actions yesterday after a wild shootout and chase.
"The officers could’ve probably escalated based on his escalation but they were wise in their decision to deescalate and I’m so thankful for that." #abc11 pic.twitter.com/pMGBeTlw8T

The chief said the suspect had a rifle, shotgun and handgun in his waistband

"Those officers were willing yesterday to do what they had to do yesterday to ensure the safety of our community," Patterson said, "We had a very dangerous individual, we knew crimes had been committed and there is no way we can allow someone like that to walk off and continue to be a danger to society. That suspect proved he was on a rampage and we had to stop that."

Pope praised the actions -- and restraint -- of Raleigh officers in an intense, fluid situation.